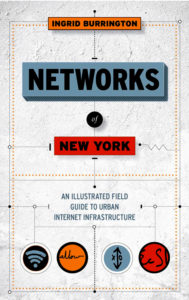 When in 2006 the Republican senator for Alaska Ted Stevens described the internet as “a series of tubes,” his words almost immediately mutated into a million snarky memes playing on his techno-ignorance.  As it turns out, the experts working hardest to explain to nonexperts how the internet really works now have Stevens to thank for the origin of their dominant metaphor.  In 2012 Jason Blum wrote a history of internet infrastructure that he called, in a gesture at once ironic and literal, Tubes: A Journey to the Center of the Internet.  Ingrid Burringtion, in Networks of New York, also starts there: “it can be easy to forget that most of the Internet is, in fact, a series of tubes” (17).  To speak of internet “tubes” has the effect of emphasizing all the matter and energy that go into making our experience of using the internet, for which “the cloud” currently stands as the dominant metaphor.  Burrington would like to clear our cloudy thinking by showing us how to follow the tubes.

Her book is precisely, and wonderfully, what it claims to be: a field guide to the locations, materials, marks and traces of the internet in New York City.  There is not a sustained prose narrative or polemic in the book, but Burrington’s inventory forces home the realization that 21st century New Yorkers live inside the material embrace of a vast electronic service-and-surveillance infrastructure, comprised of real objects like cables, cameras, circuit boards, junction boxes, transmitters, and receivers, many of which are observable at street level.  “We basically live,” she observes, “inside a really big computer” (12).

That may sound overblown, but then few of us are as attentive as Burrington to just how all this internet stuff that surrounds us is employed in projecting, to borrow from Walter Benjamin, an “equipment-free aspect of reality” that is “the height of artifice.” Benjamin insisted that the illusion of an equipment-free reality was produced “on the basis of the most intensive interpenetration of reality with equipment.” Though he was writing about film, the insight is just as compelling for the internet. In New York and many other cities that have reached “a new scale and level of organization,” says Rem Koolhaas, infrastructure becomes “much more important than architecture,” though it is also much harder to see, because unlike architecture, it is meant only to be used, not worshipped or appreciated in or for itself.  Burrington flips the magic of equipment-free reality on its head, “practicing the everyday magic of seeing the Internet as part of a city’s landscape and everyday life” (10).

Burrington is an artist and a writer who has produced a substantive body of work dedicated to thinking with, about, and against the equipment behind our Internet reality, so Networks of New York can be understood as part of a larger corpus, and, as such, as the empirical part of a larger, still emerging, theoretical argument. Producing a field guide like this one allows Burrington to share her enthusiasm and her prodigious research in the form of a portable tool for other makers – artists, writers, readers, and activists – who might also want to make something of the material guts of the digital ether. Before Melville House published it this year, Burrington published the first version of the book herself during a residency at the Eyebeam Art and Technology Center in Brooklyn. Both versions contain her illustrations of the networked objects she describes and catalogs. This is the book you want to carry with you as you walk the streets of the city, marking, with the help of its expert guidance, the earthly machinery that projects our digital ghosts.

It’s the nature of internet infrastructure to try to make itself as unobtrusive as possible, for reasons of security as much as aesthetics or convenience.  Like most other kinds of infrastructures, however, internet infrastructure doesn’t have to try too hard to hide itself, because people aren’t usually looking too hard for it.  It hides, like Poe’s purloined letter, in plain sight: seen but rarely recognized for what it is.  It can do so for another reason, stranger and more obscure than security or convenience. To paraphrase Benjamin Bratton’s formulation in his book The Stack: On Software and Sovereignty: the internet age has effectively reversed Michel Foucault’s insights about social discipline in the pre-internet modern era. It used to be that we knew we might be watched sometimes, so we behaved, paranoiacally, as though we were being watched at all times.  In the internet age, we know we’re always being watched, so we behave, psychotically, as though we never are.  And in order to pretend we’re never being watched, we pretend not to see the network of data-emitting and -collecting nodes, not only on our networked devices, but all around us, in the fiber-optic cables beneath our feet and the cell towers above our heads.  Bratton calls this “exhibitionism in bad faith.”

People who push past such bad faith and look hard at infrastructure, like Burrington, are suspect.  More than once, as her book recounts, she was politely but firmly denied access, or asked to leave the premises.   If the guards don’t take you for a terrorist, they’ll dismiss you as a weirdo: an infrastructural pervert. Most often though it wasn’t suspicion of her motives so much as a “failed transaction” caused by a new, unrecognizable category of inquiry (9).  Internet infrastructure is not yet, Burrington reports, considered “tourist-worthy infrastructure like the Hoover Dam” (66).  According to Geoff Manaugh’s recent A Burglar’s Guide to the City, when urban infrastructure isn’t part of the legitimate domain of the cable installer, the plumber, the urban planner or the architect, it’s usually part of the shadow domain of the criminal. This is part of the reason why the genre of urban exploration, for example Bradley L. Garrett’s Explore Everything: Placehacking the City, links infrastructural curiosity with the adrenaline high of extreme sports and the legal jeopardy of trespassing.  Interest in infrastructure, for anyone other than authorized personnel, is associated with the illicit.

The illicitness of an interest in infrastructure partly has to do with Bratton’s exhibitionism in bad faith, the sense that we would rather not think about internet infrastructure in order that we might preserve the illusion of equipment-free reality, Benjamin’s lovely “blue flower in the land of technology.”  It is also part of a fundamentally civil, fundamentally decent, but also fundamentally quietistic human instinct to de-escalate the aggression of the internet’s gaze by politely lowering ours.  Back in 2004, when the urban installation of CCTV was still new enough to be a publicly sustained controversy, Banksy stenciled the words “What are you looking at?” on an exterior wall near the Marble Arch in London, right in the sight-line of a surveillance camera.  The effect was that the wall itself appeared to defy the camera’s aggressive prurience.  The implicit argument was that we can’t afford not to meet the camera’s stony gaze with our own.

Reciprocating the surveillance gaze can be even harder than it already sounds. Burrington recounts her ­­journalistic efforts to find out “the exact number and locations” of NYPD cameras in the city.  Her Freedom of Information Act request was denied on the grounds that disclosure “would enable the planning of criminal activity so as to reduce the possibility of being caught on video” (96).   But despite being denied an answer to her initial inquiry, Burrington was able to learn a lot about the infrastructures of police surveillance.  Since 2012 New York City Police have operated, in collaboration with Microsoft, the Domain Awareness System (DAS), a “massive counterterrorism apparatus that collects and analyzes all of the information from police-operated networked devices” (96).  The DAS is geographically and architecturally manifest in the footbridge above the High Line in Chelsea that connects the NYPD Intelligence Division at 111 Eighth Avenue – a building better known for housing the upscale food court Chelsea Market – and the FBI’s Joint Terrorism Task Force at 85 Tenth Avenue, a building classified as a “surveillance-proof government building.”  Amazingly, that footbridge, physically connecting the NYPD and the FBI and symbolizing their cooperation, “remains locked,” which must, after all, be a symbol of something; for Burrington, it’s that “communication across agencies is apparently Not Their Thing” (70).  But they do communicate, if not over the footbridge then virtually over the DAS, which also includes cameras owned by “private “stakeholders” including the Federal Reserve, Goldman Sachs, and Pfizer, who have access to the DAS headquarters at 55 Broadway, an office building at the corner of Exchange Place” (97).  The DAS, in turn, is comprised of a dizzying variety of surveillance tools installed in the streets and on vehicles: automated license plate readers (ALPRs); ShotSpotters (gunshot detection sensors); CrimeEye cameras (Department of Homeland Security); NYPD cameras; and others.

That’s just a sampling of the kinds of things one learns from using Burrington’s Field Guide.  I’ve stuck to the surveillance-state theme for the most part, but I want to stress the fact that Burrington’s project is born as much of wonder as it is of suspicion, which, to my mind, is a combination that defines the best kinds of critique. She shows us that since 2004 New York’s traffic signal controllers exchange information on a dedicated wireless network for city agencies (NYCWiN) so that they can “adapt to the immediate conditions of traffic” (56).  The Department of Environmental Protection uses NYCWiN to meter water usage and detect leaks in the city’s water pipes (57).  New York has tried, and is still trying, to install public wireless internet service through various, and so-far-failed, projects and public-private partnerships.  In New York, the internet is not only a technology of surveillance but a fantastic tool for optimizing the city’s flows of people and things and for providing people with a communication service that, for better or worse, is quickly being redefined as a need rather than a luxury.

It may not be considered normal to be so interested in infrastructure. But for Burrington, as for many of the authors mentioned here, the normative force of that judgment is, ipso facto, a major argument in favor of taking an interest. If someone or something tells you that you shouldn’t be interested, or don’t need to be interested, in how the internet works – something that, in just over 20 years, has entirely transformed most of our daily lives – that is likely a clear sign that you’d better start studying. We live in a “world full of large, complicated systems” (13). We need to learn where they are and how they work if we want to be able to ask how  – in a city like New York, it’s too late to ask whether – we want to live with them.

Michael Rubenstein teaches English at Stony Brook University.  He is the author of Public Works: Infrastructure, Irish Modernism, and the Postcolonial (U of Notre Dame Press), which won the Modernist Studies Association Book Prize in 2010.  He is co-editor, with Sophia Beal and Bruce Robbins, of a special issue of MFS Modern Fiction Studies called “Infrastructuralism” (Winter 2015).

Benjamin, Walter. “The Work of Art in the Age of Its Mechanical Reproducibility.” In