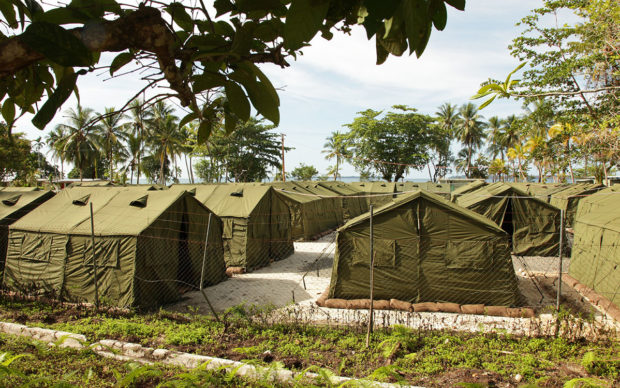 On Refugee Literature and the Art of Giving a Fuck

A bestselling 2016 blog-book bears the title: “The Subtle Art of Not Giving a F*ck”. The title has undoubtedly gone some way in making the book eye-catching. Perhaps what’s inside has helped as well. I wouldn’t know. There is something incredibly off-putting and contradictory about that asterisk. The blurb explains that the book teaches you to prioritise putting your energy into (or giving a f*ck about) issues like family or health. Yet the title seems self-gratifying and parsimonious, even priggish. Because surely of all the things readers should give the least of a fuck about is whether or not the “u” in a self-evident swear word should be covered with an asterisk.

What is it we are really covering up when we speak of literature? The contradiction between what is aesthetically appealing but imaginary and what is realistic but ugly defines the distance between the literary text and its impact. To be beautiful, literature requires a cover up of reality that does barely enough, much like the function of the asterisk. Mimesis, the distance between reality and its representation, operates through this cover-up. So even when what is portrayed is very ugly, literature should be beautiful enough to stop readers from having to run to the nearest toilet to vomit.

Political impact, however, doesn’t need to be beautiful. In matters of the everyday, the asterisk becomes gaudy.

These questions come on reading one of the latest, more successful voices from the refugee/detention camp. Behrouz Boochani’s No Friend but the Mountains: Writing from Manus Prison is not the first piece of literature to emerge out of the experiences of contemporary refugee camps and detainment centres. Nor will it be the last. It is a semi-autobiographical prison diary (although the introduction tells us it’s a novel) of a Kurdish Iranian journalist who is currently serving his sixth year in one of Australia’s detention centres on Manus Island PNG. I say “serving”, but he has committed no crime. The book was written on a mobile phone, for fear that security would confiscate his writing materials, and sent out via Whatsapp messages to a primary translator, who put the sections together. All these were then sent to the current book’s translator, Omid Tofighian, who worked with Boochani over phone messaging (again) to render the text into English, during the process of which some of the prose was revised and reworked.

This story of remote, digital multi-composition can strike those of us who expect writing to be a slow, textual-based process with some skepticism. It certainly puts paid to the image of a writer scribbling artfully amid paper-based debris, ink splats and shrivelled teabags. There is something implicitly luxurious about having the space and time to write. Writing, after all, is one of the oldest and worst-paid professions. You need a day job to sustain it. Space and time are luxuries. Words like refugee, space, time and luxury sit uneasily together. Yet what else does a detained person have but a certain space and a lot of time?

In terms of beauty, many of the diary’s passages are handsome, with fine attention to detail and spellbinding characterisation. We all know, for example, a “Cow” and a “Maysam the Whore”. We might even have been one of them at some point. Overshadowing the writing, however, is a story of bigger political exigency. Assuming the writing isn’t up to one’s taste, what keeps us going?

In classifying this as “refugee literature”, if such a genre is feasible, one wonders when refuge in literary history actually became a four-letter-word. That is, when did the act of seeking refuge become ugly? Because, of course, to be a refugee is not to be an immigrant, which implies paperwork-in-progress, or an expat, which drips with white professionalism, or an exile, which hints at intellectualism, or an émigré, which smacks of an outmoded decadence. To be a refugee is to be huddled in a boat, half-dead, or clasping a gate of barbed wire, suspicious and glowering, or peeping out from behind a tree, cowering and veiled with a mud-faced baby hanging on to your skirt, or staring upwards at the sky from within abandoned, concrete walls, or walking freely within a certain vicinity but policed into segregation for perpetuity, or forcibly detained on an island in the middle of the Pacific, or featured on the front cover of a UN calendar, in sepia or colour, depending on the month. To be a refugee is to carve your name on your arm with a knife so the scar reminds you and others who might speak your language that you had a name once that wasn’t a number. To be a refugee is to be looked away from as if you were essentially an embarrassment, to be smiled down upon as the less fortunate, to be represented.

These aren’t the experiences all refugees go through, of course. In fact, they aren’t the experiences only refugees go through. They are, however, experiences that are horrific enough to to have made refuge what it is today, from cause to legal category. As a cause, refuge is an indictment of the border systems we have put in place that grant freedom of mobility unequally and deem it normal to place people who have committed no crimes in detention. As legal category, refuge is an indictment of the standards and terms of nationality: itself essentially a marker of exclusion rather than inclusion, something to differentiate this community from others.

There is something fundamentally wrong with our political systems if they are used to mark out the people in the world who have “freedom of mobility” from those who do not.

Refuge isn’t a new word, although being a refugee, like being a national, is a new legal category. In literature the idea of seeking or finding refuge has even traditionally had an empathetic connotation, more reminiscent of finding a haven than hiding in a car boot. In fact, the figure of the refugee has often been used as a literary trope precisely to ask the reader to give a fuck.

For what it combines of past history, present circumstance and the dream of a new political future, George Seferis’s magnificent Mythistorema is a microcosmically apt example to use here. The poem series is mythically about the civilizational and very Greek quest to find both refuge and self-value. In its time it also had particular resonance with the Greek Catastrophe in Asia Minor. By mixing its metaphors, Mythistorema turns the Argonauts from heroes into refugees. Rather than reaching the golden fleece, the journey of the Argonauts, who are characterised by Seferis with some intensity as truth-seekers, remains unfinished and futile.

“We moored on shores full of night-scenes,
the birds singing, with waters that left on the hands
the memory of a great happiness.
But the voyages did not end.
Their souls became one with the oars and the oarlocks
with the solemn face of the prow
with the rudder’s wake
with the water that shattered their image.
The companions died one by one,
with lowered eyes. Their oars
mark the place where they sleep on the shore.

No one remembers them. Justice.”

The voice is haunting, the scene horrific. It is a melancholia as only Greek poetry can make it. We almost forget the Argonauts were soldiers. Their tragedy in the Greek context is that they were heroes who lost their way. The tragedy of today’s refugees is that they aren’t heroes and that some of them find it.

The poem is dominated by the voice of Seferis himself, however– the voice of irony at its best. “Argonauts” starts with:

And a soul
if it is to know itself
must look
into its own soul:
the stranger and enemy, we’ve seen him in the mirror.

They were heroes in mythical tales, but in history they could have easily been uprooted people. Hasn’t it happened with ordinary Greeks in Smyrna, the context implies? For pathos, the soldier must turn into a victim on a boat, a shivering, stranded, helpless figure who carries the weight of the Smyrna history on his shoulders.

A victim, then. But why a victim? Must refugees be victims so they are allowed to cross borders, especially when soldiers become heroes if they do the same thing by force?

There is nothing as demeaning as having to be a victim in order to be recognised as human. There is nothing as inhumane as having to be on the right side of the quota system in order to be given human rights. The difference between a traveller and a refugee is that the latter is denied their “mythohistory”: their quest for a dream and their agency to create their own future. At best, a refugee can only be a victim.

Is Boochani’s prose as beautiful as Seferis’ poetry? It’s a matter of taste, which can sometimes be, of course, a matter of politics. Politically, the latter’s beauty lies in pushing the mind to imagine the desperate, the former’s in giving the desperate a name. Seferis’ poetry is about what could be and has been; Boochani’s prose is about what has been and could be. There might not be much difference. In dealing with human loss, however, both share one thing: they push the reader to give a fuck. It is at that precise moment, when we give a fuck about the stranger and the enemy in the mirror, not just when we empathize with the stranger or the enemy in the absolute, that we find beauty. Refuge is not a four-letter word. Nor is it someone else’s misfortune. It is the stranger in the mirror. What has happened to us, what could have happened to us, what might happen to us, what we have done and are doing. In the stranger in the mirror lies either our denunciation or our salvation.