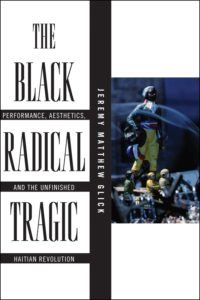 Jeremy Matthew Glick’s The Black Radical Tragic accomplishes something quite subtle. It speaks about revolutions, and dramatic representations of revolution, to construct a frame that enables a complex seeing of the dynamic material and organizational tensions that power their making. The Black Radical Tragic does not offer predictions about what revolution will or should look like. It is in this sense a meditative book that mines past aesthetic insights to reflect on how to think dynamic contradictions together in radical work and thought. Glick isDaCost primarily concerned with the dynamic between radical leadership and mass base. Another, less foregrounded, but very significant, tension in Glick is between structural, material conditions and individual experience. These tensions are multiple, but can, in my view, be reduced down and referred to as the tension between the individual and the collective.

How does the leader-base tension operate in relation to the Black Radical Tragic? The work of C.L.R. James on the Haitian Revolution helps lay this out. Glick draws our attention towards James’ Haiti play, Toussaint Louverture (1936) and history, The Black Jacobins (1938), in which a change of title indicates a shift on James’ part between the location of narrative centrality from Toussaint, the revolutionary hero, to the Haitian masses, the plural “Black Jacobins.” For Glick, this shift in emphasis signals the authors attempt “to show how the representation of individual revolutionary strivings [are] only intelligible as part of a collective movement.”[1] Glick notes also that James renamed his play in 1967, changing the title from Toussaint Louverture to The Black Jacobins, even as Toussaint, (played by Paul Robeson at the time) took up most of the action in the play. These alterations display a fretted vacillation—a dynamic push and pull; a tension—between individualist and collectivist readings of revolutionary activity.

Who should star in the production of the show that is history? Rather than choose between the individual hero and the masses, Glick suggests that we contemplate the political and historical productivity of their dialectical interdependence. This grates up against the notion of leadership as the “vanishing mediator,” and contradicts framings of the “world historical individual” or “hero” as radically dubious (Raymond Williams used the term “doubtfully Marxist”). For, as Glick points out, black radicals may not yet wish to relinquish the figure of “the ‘world historical individual.” The dire experience of black life (and black radical movements) presently and historically, necessitates a revaluation of the “efficacy and representational currency” of individual leaders, who appear “sometimes central” sometimes “harmful,” but always interdependent with masses and collective in revolution.[2] The Haitian Revolution is a generative historical example of how this tension can be extremely productive politically. The Black Radical Tragic as a frame aims to “keep the individual and the mass in constant dialectical tension” in consideration of its revolutionary efficacies.[3]

How, then, to understand the tension between the structural, material “collective” and individual experience? Glick notes how structural and systemic failures often work themselves out on individuals and are experienced as pain, mourning, and loss. A theoretical and politico-aesthetic framework that takes human experience out of structural analysis is not adequate to comprehend this complex reality. There is another reading of the collective-individual tension that we must also grasp. To do so James again proves useful, for as he wrote in the 1938 Preface to The Black Jacobins, “Great men make history, but only such history as it is possible for them to make. Their freedom of achievement is limited by the necessities of their environment.”[4] Here, the material and structural relate dialectically not only to human loss, but also to human possibility. The Black Radical Tragic satisfies the conceptual need to think this interdependence between structural forces, and individual vulnerabilities or capacities.

What happens the dialectical interdependence between individual and collective is not thought? This, I believe, is where tragedy enters the frame. Glick draws from James to assert that “the tragic…is a mark of revolutionary degeneration. It marks the point when the leader loses touch and stops communicating with his base.”[5] For a leader to lose touch with his base amounts, in other words, to a severing of the productive individual-collective bond. It inaugurates the giving-way of dialectical tension to tragic gap. In the case of Toussaint, the tragic gap is essentially caused by strategic and political mistakes. But “losing touch” is also a conceptual problem—a failure to perceive and to represent interrelation—that produces tragic results.

To draw in a recent example, narrative (media) representations of the “largest gang bust in history” —which took place last April in the Eastchester Gardens public-housing complex in Williamsbridge, Bronx—demonstrate how conceptual failures provoke tragic consequences. In the wake of the raid, triumphalist narratives have portrayed arrestees—around 100 black men, averaging 24 years old—as local terrorists, and their mass-removal as a safety measure for the well-being of the surrounding community. These superficial narratives evade thinking the link between material disenfranchisement—ailing buildings and lack of economic opportunity—and individual gang affiliation. These narratives also underemphasize the sense of indignance and loss felt by residents in the wake of the raid. Resident Marcus Wray was quoted in New York City Lens, saying, “The way the media is portraying these young black men…they’re portraying them as they’re terrorizing the neighborhood…Major drug dealers, killers. Which is not at all true. These kids are fathers. These kids are sons. These kids are loved.” Another anonymous man was quoted saying, “They took everybody. Everyone I love is gone.”

Media, in its narrativization of events, commits the tragic error of failing to conceptualize, to hold in tension, the mutually constitutive bond between the individual and the collective. A Black Radical Tragic perspective resists such failure by enabling us to see complexities that underly and power events. Our work lies urgently in remembering both human (individual) and material (collective) sources of tragedy in interrelation.