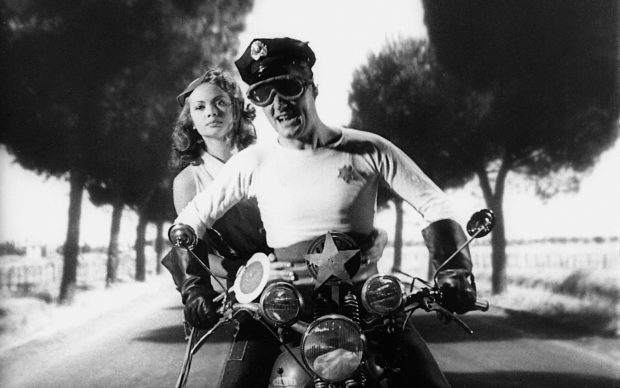 What is an Americanata?

It is not known when, exactly, the word Americanata came into use or who coined it. Popular understanding has it that the word entered common usage after World War II, which brought a large number of US troops along with the Allied forces to Italian soil to liberate the country from German occupation.

The years of economic rebuilding in the 1950s saw a process of Americanization throughout Italy through US popular culture and commercial products. SPAM was not just American, it was also an Americanata. Putting ham in a can was something only Americans would do.

In the 1954 film An American in Rome, the thoroughly Roman protagonist Nando Meliconi played by Alberto Sordi tries to dress and speak like an American and do what he perceives to be American things like drinking milk with a meal instead of wine.

The 1956 Neapolitan hit song, Tu vuò fà l’americano (You wanna act like an American) reminded Italians that even though they drank whisky and soda, danced rock and roll, played baseball and said I love you, they were still born in Italy.

Italians generally use the term Americanata in the context of cinema and television, but they use it also to refer to social practices they deem to be exclusively American. So wild car chases with exaggeratedly large (by Italian standards) Cadillacs stampeding and somersaulting their way through the streets of New York, jam-packed with people and traffic, is an Americanata as much as crucifix-brandishing television evangelists trying to exorcise the evil spirit from the possessed devotee, writhing on the ground and speaking in tongues. These were things Italians saw only in US cinema and television programmes.

Clapping your hands to turn the lights on and off and little fans on baseball caps to keep cool under the scorching sun are also Americanate. While the German word kitsch is a much-used loan word in Italian, Americanata is sometimes preferred over kitsch for the kind of kitsch considered to be exclusively American in origin. The American in Americanata refers to the US and not Canada or any South American nation.

Italians use Americanata with a combination of snobbery and derision when making critical, aesthetic judgments, but also with a tinge of admiration and approval. It doesn’t matter if using Nike trainers with dress suits betrays all standards of Italian elegance. Such fashion sense is practical and comfortable for the workingwoman, and that kind of pragmatism is admired. The ‘ata’ suffix in Italian sometimes makes an adjective positive. A genialata, for example, is something clever, a genius of an idea.

It doesn’t matter if breastfeeding in public is seen as something “mostly Americans seem to have a problem with” and “make a big deal about” in the media. That kind of Americanata makes Italians consider the sexism in their own culture, too. The same goes for the #MeToo movement.

When Italian Luca Traini went on a shooting spree targeting African migrants in the town of Macerata, some referred to his ‘Far West’ gesture as an Americanata, not because they were downplaying or trivializing the hard reality of Traini’s criminal actions, but because they saw it as the big screen coming to real life– ironic, considering that in the US, the frequency of real-life shooting often

becomes the stuff that cinema is made of.

But following the Traini shootings, when placards bearing the words ‘My colour is not a crime’ and ‘Black Lives Matter has come to Italy’ popped up at the anti-racism demonstration held in Macerata—one of the largest protests Italy has seen in recent times—I did not come across any reference to these imported English slogans in a largely Italian-speaking crowd as being an Americanata.

Americanata has been around for decades, long enough for it to have acquired critical nuance. Is there consensus that films like Troy or Die Hard are Americanate but not, say, a John Ford movie? Is Donald Trump an Americanata?

Italians are using the word Americanata a lot, tourists are hearing it in Italy, and more people around the world are studying Italian. All this has created the need for the word Americanata to be translated, as can be seen from sites like Word Reference and Reverso. I feel, however, that the time has come for Americanata not to be translated. I propose that it be used as is. A new Italian loan word should be incorporated into the English language.

Americanata need not necessarily be understood only as a derogatory way to talk about American culture and stereotypes. It can also be the key to understanding how Italians see themselves. It can be self-deprecating or complimentary, a judgment on the ability of Italians to imitate well or poorly. Once we speak of good and bad imitations, we have to speak of good and bad Americanate. Are Italian game shows, action movies and TV series about crime good or bad Americanate?

The notion of Americanata also betrays how Italians feel about the appropriation of their own culture. They make fun of Americans (including Italian Americans) calling a pepperoni pizza one with salami topping instead of peppers (peperoni), and ordering a latte to mean coffee with milk and not just straight milk. And they may turn up their nose at pineapple pizza, spaghetti doughnuts and drinking cappuccino with lunch or dinner, even though Italians have been putting all sorts of things on pizza for decades and many Italians themselves have unconventional food habits like sprinkling Parmesan cheese on tuna pasta.

But Italians are perhaps secretly proud that the Italian pizza, like the Italian language, is constantly being reinvented.

They know that in every Americanata, there is a bit of Italy.

This topic was part of a seminar delivered by Masturah Alatas at the OASIS American Studies International School in Procida, Italy, 2018.

Masturah Alatas is the author of The life in the Writing Syed Hussein Alatas: Author of The Myth of the Lazy Native (Marshall Cavendish 2010) and The Girl Who Made It Snow In Singapore (Singapore: Ethos Books 2008). Her articles have appeared in CounterPunch, boundary 2 and Will The Flower Slip Through the Asphalt: Writers Respond to Capitalist Climate Change by Vijay Prahad (Editor), Naomi Klein, Amitav Ghosh et al. She teaches English language at the University of Macerata, Italy, where she has been living for over two decades. She is currently working on a novel set in Italy and her native Malaysia around the theme of polygamy.