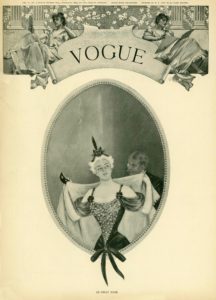 Of the thousands of demonstrators marching the day after the inauguration, a good percentage were wearing what Rod Dreher of The American Conservative decided to call, not so subtly, “vagina totems.” The coinage may be a sign of the ongoing discomfort some conservatives have in owning up to the locker-room talk that inspired the pink pussyhats in the first place. Not that vagina totem isn’t catchy, but its literalism does seem to elide the hat’s political humor, not to mention its fashion sense.

An earlier version of the pussyhat kept both things in view. The cover of Vogue on January 31, 1895, featured a tightly corseted young woman, presumably a debutante, with an opera mask in one hand and a scruffy black cat with an erect tail and white saucer eyes clinging to her head. (It’s more phallic than vaginal.) A monocled, Trump-like suitor, rather too old and too attentive, stands behind to help her with her cloak. The cat looks at us, while the model looks up and to the left, with a smile expressing pleasure, contentment, daring, maybe even a challenge. “Can’t grab this,” she seems to say, shielding herself from the old man.

We’re let in on the joke by the bow delicately overflowing from the inset, dropping strategically below the waist, that points to a caption reading, in French, LE CHAT NOIR, a reference to the fin-de-siècle bohemian cabaret in Paris.

In the 1880s and 1890s, Le Chat Noir was host to a bohemian counterculture of artists known as the Hydropathes and expositions of Les Arts Incohèrents, specialists in offbeat parodies and puns now understood to anticipate the early twentieth-century avant-garde. It was there that exotic shadow theater adaptations of Flaubert’s La Tentation de St. Antoine were staged using zinc cutouts and elaborate smoke and light effects; and that Mallarmé’s circle of symbolist poets collaborated with musicians, post-impressionist graphic artists, actors, and actresses to create an art that they all understood to be edgy and unpredictable.

The cabaret’s iconic black cat had been made famous by a sign painted by Adolphe Léon Willette featuring the same black cat perched on a crescent moon. Willette had also done a painting, hung inside, of a woman holding a black cat on her head, an image known today La Vierge Verte.

All of this was the bohemian version of locker-room talk. Pussy, of course, is one of those very old slang words. The Oxford English Dictionary cites a number of examples of the pun, starting in the seventeenth century, including one by “Philocomus” in an 1865 book called The Love Feast; or, A Bride’s Experience, that reads “My poor pussy, rent and sore, Dreaded yet longed for one fuck more.” And it meant the same in French as in English. The story told about the cabaret at the time was that a young bohemian could earn himself a slap in the face from a newstand vendeuse by asking for the magazine by name, “avez-vous la chatte noir?” [i]

If Vogue was enough in the know to make a connection between an American debutante and the underworld of Parisian nightlife represented by Le Chat Noir, then it seems altogether likely that they would have been meaning to make a pun of just this sort. But it also seems clear that in its new situation, on the cover of an American women’s magazine, Vogue’s chat noir connoted something more than simple bohemian bonhomie. Might we go so far as to say that it is a feminist act of reclaiming the bohemian locker-room talk?

By the 1890s, the black pussy had been caught up for decades in the nexus of fashion, art and feminism. Consider, for instance, Poe’s story “The Black Cat” (1843), which finishes with a mania-inducing black cat meowing hideously from behind a brick wall, where it sits perched—on the head, nonetheless—of the narrator’s murdered wife. The story was celebrated in France by Baudelaire, who translated it, and whose own poems on cats in Les Fleurs du Mal (1857) take up the theme. He published three “pussy poems” there, like the one in which his hand becomes drunk with pleasure from caressing a cat’s electric corpse and elastic back, encouraging him to dream of a woman, cold, deep, and with a subtle air of dangerous perfume swimming over her dark body.[ii]

Was this the pussycat we see on Vogue’s hat cover in 1895? Or perhaps it was the black cat crouched at the foot of the divan in Manet’s Olympia, from 1863—the one that replaces the little, white dog in Titian’s Venus of Urbino, from 1548, thus shifting the meaning from canine fidelity to feline promiscuity, an effect probably heightened by indexing race as well.

By the early 1890s, black cats were being relayed back and forth across the Atlantic. On the French side of the ocean, materials from the cabaret, and especially from the seminal little magazine, Le Chat Noir, show the cat appearing repeatedly in unexpected places. It turns up in Japanese lanterns inside the cabaret, on a zinc cutout hanging over the piano player inside the hall, and, most tellingly, on the heads of artists’ models as they join a “solemn march” down Montmartre hill with Chat Noir notables like Paul Verlaine (angel with harp), George Auriol (in plaid), Henri Rivière (with dog and whips), Pierre Loti (with a sailors hat and below the Moulin de la Galette).[iii]

In 1894, the American Chap-Book’s editor, Herbert Stone, commissioned Aubrey Beardsley to illustrate some of Poe’s stories, the most well-known of which gives us another version of the black cat on a woman’s head.[iv] An 1896 painting from the American-born, Paris trained artist, Cecilia Beaux, Sita and Sarita, featured very much this same cat on the shoulder of her dark-haired sitter. An art poster from the 1890s, Le Chat Domestique et Son Caractère, shows the black cat in a dozen emotional states — the one from the Vogue cover, with tale straight up, being clearly an example of la franchise, frankness.

Frank, but not entirely so. Much of what is implied remains to be read between the lines to an extent less suited for our literal-minded times. No talk of actual vaginas, here, or even of suffrage, which wouldn’t get its own costume until the next decade, or of the fact that this pussy was necessarily black, the only color racially suitable at the time for representing women and sexuality together.

And yet, apparently cognizant of the implications, the woman on Vogue’s cover is there to remake the joke. She could be taken for an artist or an actress, a celebrity at a ball, a gilded-age sex kitten, a platinum blonde flagrantly sincere in her performance of sexuality. She is most certainly not the Venus of Urbino, directly inviting viewers with her puppy-like eyes and languid pose, to take visual pleasure in her form; more likely, she is the Countess Olenska, whom Edith Wharton describes decades later in The Age of Innocence, a woman of style whose bohemian free-spiritedness was taken as lewd when transplanted to New York.

The relays multiply the harder you look. In addition to everything else, the Vogue model is wearing a most unusually low cut gown that is missing the late Victorian “gigot de mouton” sleeves puffed high above the shoulders, a Romantic-era touch which had come back into fashion in the 80s and 90s; instead, her gown has thin straps the likes of which you are unlikely to find in fashion plates from the period, but which do match those that caused a scandal in 1884 when John Singer Sargent first displayed his painting of the wife of Pierre Gautreau, Madame X.

When it got its start in 1892, Vogue was more than just a magazine of fashion for society-elites. Although it was that, it also published editorials advocating for freedom in marriage and flexibility in religion, suggesting that adultery not be condemned out of hand, and arguing for women to have careers. It was a magazine for the New Woman, edited by and featuring cutting edge fiction by women. Its editorial pages were given over to denouncing the moral hypocrisy of relations between the sexes, and especially of societal expectations for women with regard to marriage and careers. Its featured fiction writer was Kate Chopin, whose short pieces offered wickedly funny comments on the reality of women’s sexual desire and the stultifying effects on it of marriage. Vogue’s editor was Josephine Redding, a strong advocate for feminist causes who has been suggested as the model for Mademoiselle Reisz, the angular piano teacher in Chopin’s The Awakening who schools the novel’s heroine in the senses and the need for female self-sufficiency

So Vogue’s chat noir seems meant as a provocation not unlike the one from the women’s marches. If still in doubt, another cover is even more explicit. Running a few months later, in an Easter number, the young woman appears wearing bunny hat, an image that was equally strange and laced with an even more extreme sexual joke. Over a caption about the “natural history… of head adornment,” the model places her hands across her mouth in a fur muff—another old slang word—as if Vogue means to suggest that her speech is hidden or restrained behind the public display of her sexual wares, and ought not be.

The Vogue cover is provocative for linking fashion to sex, art to commodities, public to private, courtship to consumption, and beauty to humor and scandal. But the remarkable thing is that, as with a pink pusshyhat, there’s nothing in the black cat, as such, to give it a political valence, a personal meaning. There is nothing in a pink hat with ears that will get you either to “pussyhat” or “vagina totem” without a lot of relays through reality television, a contentious political campaign, and some recent art history. What political meaning is to be found in the pussyhat, that is to say, comes from the social effect of ties and connections as loose as these to the history of Le Chat Noir, and the reflexive sense of being part of an activist community that actually gets the joke.

NOTE: OTHER IMAGES AVAILABLE UPON REQUEST 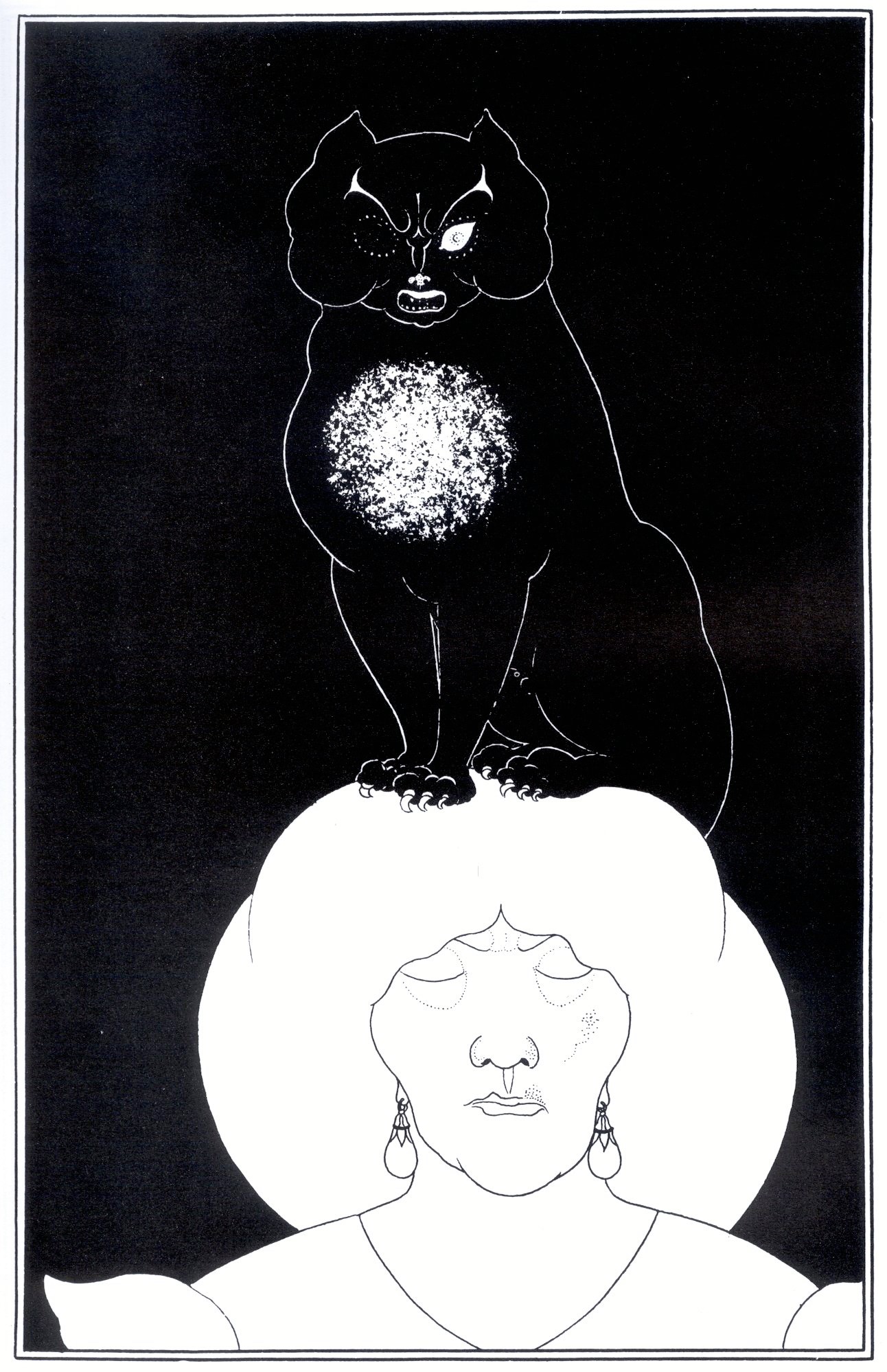 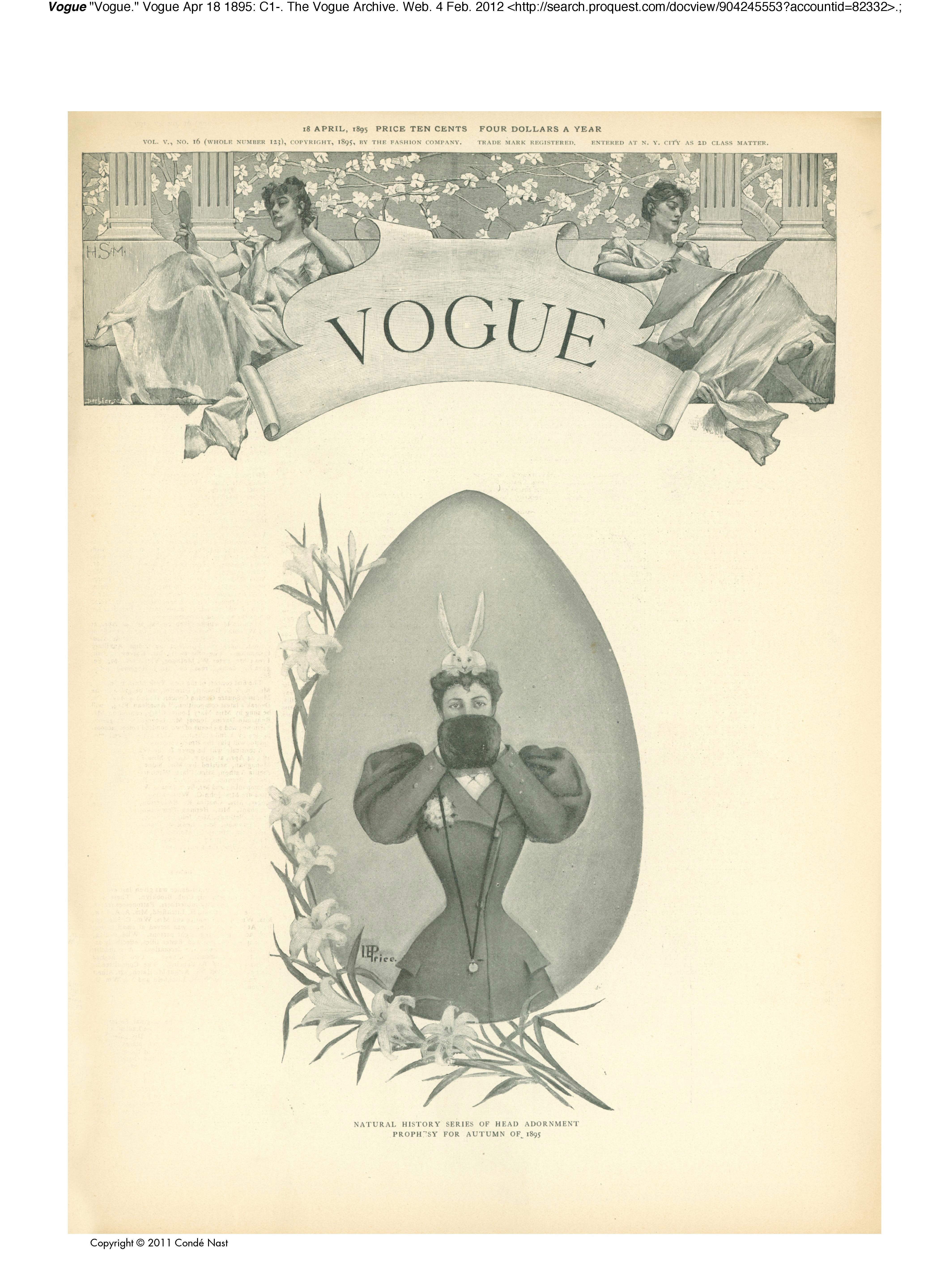 Brad Evans is Associate Professor in the Department of English at Rutgers University. He is the author of Before Cultures: The Ethnographic Imagination in American Literature, 1865-1920 (2005) and the co-producer of the restoration and screening series of the landmark silent feature film In the Land of the Head Hunters (1914, dir. Edward S. Curtis with the Kwakwaka’wakw First Nations, British Columbia) as well as co-editor of a volume of companion essays about the project, Return to the Land of the Head Hunters: Edward S. Curtis, the Kwakwaka’wakw, and the Making of Modern Cinema (2014). He is currently working on a book tentatively entitled Black Cats, Butterflies, and the Ephemeral Bibelots about the largely unremembered, international craze for proto-modernist art journals, known as ephemeral bibelots.

[i] Dennis Cate quotes Willette for this story: “Since the print run of the journal was only eleven hundred copies, Le Chat noir was not available at all newsstands, and asking, ‘Madame, do you have Le Chat Noir [a black pussy]?’ often earned you a slap when the dealer was a brunette.” See Cate, “The Spirit of Montmartre,” in The Spirit of Montmartre, 1-94, 37.

[iv] For information on this image, which was published in a very limited edition portfolio of four illustrations of Poe’s stories by Aubrey Beardsley, see Charles Gullans and John Espey, “More Addenda to Kramer’s ‘Stone & Kimball’,” The Papers of the Bibliographical Society of America 82 (January 1, 1988) 347-367, 360-362.