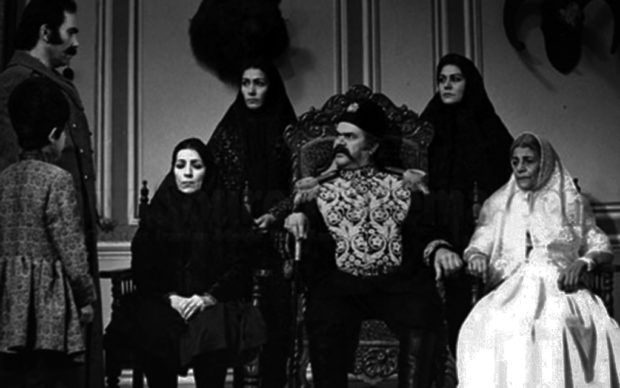 I was moved to re-watch Bahman Farmanara’s Prince Ehtejab (1974) after seeing the profusely televised royal wedding of Prince Harry and Meghan Markle. Apart from the fact that of the aristocracies in the world, the Iranian ones are those that, let’s say, hit closest to home for me—my maternal great-grandmother, whose real name was Badr al-Moluk Dolatshahi but who everyone affectionally called “Adeh,” was a distant member of the Qajar dynasty whose demise is the subject of Shazdeh Ehtejab—there’s no better antidote for bad television than good film.

Ehtejab is organized around a series of flashbacks to scenes from the life of the titular protagonist who, in the film’s present, is dying of tuberculosis. He remembers in particular the brutality of his grandfather, who murdered, among others, his own mother and brother—the latter by putting a pillow over his face and sitting on it while smoking a cigarette. We also learn, over the course of these flashbacks, that upon the death of his wife Fakhr al-Nessa, Ehtejab forces her servant Fakhri to take her place. The experience of Ehtejab is nigh-constant disorientation, a sense of not ever being sure where or, more importantly, when we are. We resort instead to certain visual cues such as Ehtejab’s hair color—sometimes black, sometimes silver—or to the particular quality of a given shot’s chiaroscuro, to signal what point in the prince’s life we are witnessing. A product of the Iranian New Wave prior to the Islamic Revolution of 1979, Prince Ehtejab, a modernist tour de force adapted from Houshang Golshiri’s novel of the same name, won the Grand Prix at the Tehran Film Festival. It nevertheless faced censorship by the Pahlavi government, and was famously forced to omit a scene involving a female member of the royal family masturbating during a religious ceremony.

It had been a long time since I had seen Shazdeh Ehtejab. The first time was in childhood, so the memory of it is hazy, fragmented (not unlike the film itself); the second was much more lucid—in an Iranian Cinema course as an undergraduate. But what struck me this time, looking at it again, was the remarkable way in which Farmanara forges an aesthetic language with which to depict the strangeness of aristocratic temporality. That is, the film’s narrative contortions are the formal sublimation of its very subject matter—the crisis of the aristocracy having to confront its demise, the past meeting its death in the present. In this way, the film doesn’t just critique Qajar violence, it recognizes it also as a formal problem, one perhaps the cinematic medium can deal with in an especially apt way. The film takes as its central problem the question of how to represent resistance to decay, where Ehtejab’s tuberculosis comes to synecdochically embody not just the fate of the aristocracy in modernity, but also the degradation of time as such, which the cinema has the unique capacity to arrest, preserve, and set back in motion.

Farmanara’s interest in interrogating the kinship between the temporality of a decaying aristocracy and the mechanics of cinema is marked right from the beginning, when the film cuts from a shot of the prince having a coughing fit in his empty palace, to a series of still photographs of generations of dead royal family members. As he continues to cough in voice over, the photographs proceed one after the other at a funereal pace—as they will periodically throughout the film, one time to the solemn sound of gun shots. Garrett Stewart has suggested that when films feature photographs, they are often calling attention to the photogrammatic basis of the medium, how the moving image is an illusion created by the rapid movement of stills. But it is precisely that kinetic condition of cinema—its animation of that which is in fact still, dead—which Shazdeh Ehtejab recognizes as a form of madness. When Fakhr al-Nessa lies dead in her bed, Ehtejab pulls a sheet over her and then violently forces Fakhri to put on one of Fakhr al-Nessa’s dresses, to lie in bed with him right next to the covered corpse in an act of extreme and rapacious denial, essentially bringing the still image of his dead wife back to life by reproducing her in Fakhri’s living, moving body. A similar logic of course underpins Hitchcock’s Vertigo (1958), in which Jimmy Stewart’s character Scottie aggressively urges the second instantiation of Kim Novak to recreate the image of the first, a narrative move to which Fakhri’s forced reincarnation of Fakhr al-Nessa has been compared. But what makes Shazdeh Ehjetab so distinctive, is the way that the material conditions of cinematic representation come to mimic, if not bear the weight of, history. Critics have discussed how Shazdeh Ehtejab brings to light the trauma of dynastic history in order to exorcise it from the Iranian consciousness. But there are indeed other forms of denial that Farmanara is also interested in uncovering. By exposing the still photographs often and long enough to remind us that when we are watching a film we are in effect choosing to ignore the photograms’ stillness, Farmanara stitches, into the film’s very materiality, the logic of the aristocracy’s mania to resist its own decay, which is to say to preserve its privileges. This mutual enfolding of history, form, and aesthetic material accounts for why Ehtejab doesn’t so much die at the end of the film when he lumbers down the spiral staircase into the palace vaults, as his image vanishes from the screen.

Needless to say, the cinematography of the royal wedding did not encourage such thoughts as the present Duke and Duchess of Sussex rode in their carriage down the streets of Windsor—not to the sound of tubercular coughing, but to the screaming of fans and without so much as a glitch in the filming of it. In laying bare the seams that hold the moving image together, Farmanara refuses to foster the complicit stupor that the screen can so easily induce, hailing us to imagine alternative futures than those normalized by history.

Pardis Dabashi is a doctoral candidate in the English department at Boston University, where she is finishing her dissertation on the relationship of early narrative cinema to the modern novel’s relinquishment of realist plot. A portion of her project appeared in Modernism/modernity in September 2017, and she has a piece in The Routledge Companion to Jacques Lecoq (2016). She is currently beginning research on her second project, a study about representations of cultures of sovereignty in the novel, film, and television.