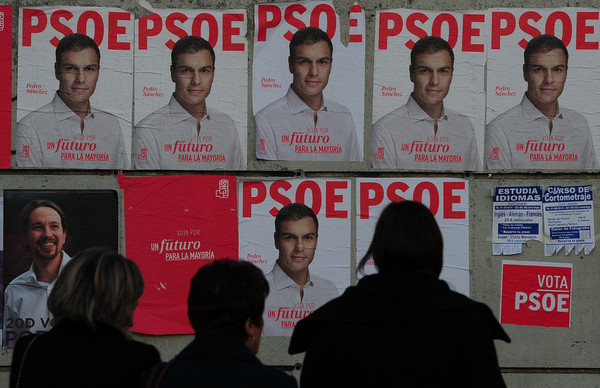 Spain: a Crisis of Social Democracy 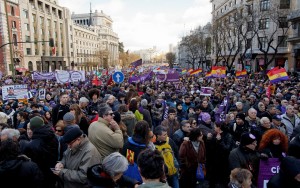 In June of 2013, David Unger wrote a prescient editorial piece in the New York Times about the collapse of European social democracy. In the face of the Crisis and growing inequality, Unger wrote, the social democrats had “shrugged and acquiesced” to the right’s disastrous doctrine of austerity instead of “fighting to protect their traditional constituents.” Now these constituents, harried by years of joblessness or precarious employment, pension cutbacks, declining health services and education, evictions, firings, etc., were turning on the parties that had betrayed them.

Just this month, Antonio Avendaño, a writer for the left daily “Publico,” drew a picture of this process as it is at work in the Spanish political order, where the national elections of December 20, 2015 have led to a deadlock in which neither the parties of the right nor those of the left have been able to build the coalitions necessary to form a government. In both cases, the new parties, Ciudadanos and Podemos,  got enough votes to make some sort of coalition-building necessary, but have so far refused to support the traditional parties. On the right, the reform capitalists of Ciudadanos have refused to make a pact with the Partido Popular, fatally compromised as it is by corruption scandals which continue to break every week. And on the left, Podemos, which drew many voters from PSOE (The Socialist Party of Spanish Workers) in the December elections, now seems bent on exploiting divisions within the party to demolish it. 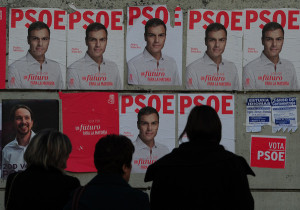 Why has PSOE lost so many of its voters to Podemos, Avendaño  asks, and why is it likely to lose even more if a second election becomes necessary? Here, in my translation, is his answer: “The tearing apart of the socialists stems from their manifest inability to resist in any credible and effective manner the unstoppable process of the destruction of the politics of economic progress and social equality perpetrated in recent years in Spain and all of Europe. The European socialists see with dismay that their flags are burning but they don’t know how to put out the fires. This is happening and the socialist voters see it happening. That’s the principle reason that so many people have abandoned PSOE for Podemos. Maybe the new party doesn’t offer viable solutions, but at least it offers a howl, a rude remark; it throws a punch. Maybe these aren’t the best credentials for governing Spain, but they are likely to destroy PSOE.”

This remains for me the most compelling explanation of what is happening on the left today in Spain. The leaders of Podemos are deeply committed, rhetorically gifted, and tactically brilliant; they have rescued the generation of the Indignados (Spain’s Occupy) from despair.  But their ideological roots, only recently mulched over, are with Leninism and Chavism, two strands of left thought and practice that have not fared well historically. Their version of social democracy is stronger on the restoration of social and economic rights than on the need to finally modernize Spain’s unwieldy regulatory system and encourage responsible capitalist growth. And whenever they get the chance, they play the role of Spain’s “bad boys” (chulos) to perfection. In May, if it becomes necessary to rerun the parliamentary elections, they seem likely to become Spain’s leading party of the left, whether in opposition or (much less likely) in power. The decadent old social democratic order will have collapsed, an untested  party of the left will stand in its smoking ruins, and many, many  Spaniards will feel at least a moment of grim satisfaction. But beyond that, who knows what will come?

Bernie Sanders is no Pablo Iglesias, but his powerful challenge to Hillary Clinton in the primaries surely represents a failure of the Democratic Party to address the existential crisis of millions of Americans: young workers deprived of a future by the Great Recession and its aftermath, older workers thrown out of jobs before retirement and facing a grim future indeed, low wage workers who are finding that Obama-Care offers them little more than a not-too-cheap version of catastrophic coverage. It seems unlikely that Sanders’ challenge will dismantle the Party, but if nothing is done to reverse contemporary trends, the next challenge may come from outside, in the form of a far angrier and more radical spokesperson for retribution and change.