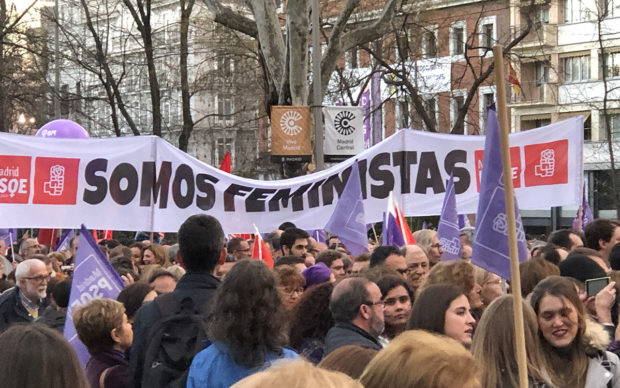 Setting a course for Fairness: the Spanish Elections

Watching the results of the General Elections come in on the evening April 28th was a matter of watching the electoral map of Spain turn red, the color of the triumphant Partido Socialista (PSOE). The Socialists, who won in all but a handful of the country’s fifty provinces, came close to obliterating the blue of their traditional rival, the conservative Partido Popular (PP), and by so doing, they helped keep Spain’s emerging ultra-right party, Vox, from parlaying its 35 seats into a place at the table in a governing coalition of the right.

Podemos, the new party of the left that put an end to Spain’s informal two party system back in 2015, did not fare as well. Having suffered a severe setback in the 2016 elections, when it seemed poised to overtake PSOE as the first party of the left, it once again performed badly this year, losing votes in more that 90% of Spain’s municipalities and finishing in fourth place nationally.

The results gave PSOE leader Pedro Sanchez another in a series of impressive victories over conservative adversaries within and beyond his party, but not the absolute majority he needed to govern effectively on his own. With five significant parties now competing for power on the national stage, coalition rule seems fated to become the new normal in Spain. Conservative factions within his own party and beyond it have called on Sanchez to form a majority government by making a pact with the center-right social liberal party Ciudadanos, but this seems unlikely. Instead, he seems likely to formalize the cooperative relation with Podemos that has served him well this last year.

Social democrats across Europe, hammered by the rise of new social liberal and nationalist parties, will welcome Sanchez’s victory and accept his alliance with a party more sharply critical of neoliberal capitalism than his own. And Podemos will gain public visibility, leverage, and time for self-reflection and reform from the arrangement. Spain too will benefit from Sanchez’s victory, especially if his party forms a coalition with Podemos. A government of the left will continue the work, begun this year, of cleaning up after the Partido Popular’s decade-long orgy of corruption, deregulation, erosion of civil liberties, and attacks on the “estado de bienestar” (welfare state). Whether it will also find ways to address some of Spain’s chronic and deeply embedded  problems of productivity and competitiveness remains to be seen.

A year ago on April 28 of 2018 the right-wing Partido Popular still governed Spain and looked fairly likely to remain in power for some time to come. The bloc of right and center right parties, Partido Popular and Ciudadanos, was polling at about 46%, while the Socialists and Podemos were at 42%. On the left, and in spite of the continuing corruption scandals of the ruling party, the Socialists and Podemos both seemed stalled, with support for the  Socialists at about 22% and Podemos’ support at no more than 13%.

A brief review of events since the PSOE first took power on June 1st of 2018 should begin to convey the extraordinary volatility of contemporary Spanish politics and explain the election’s outcome: the collapse of the Partido Popular, the dramatic rise of the Socialists, and Podemos’ once again disappointing performance:

–On May 9, 2018 Podemos’ first couple, Pablo Iglesias  and Irene Montero, rocked their party and damaged its already problematic reputation among the Spanish electorate by purchasing a chalet 30 miles north of Madrid for over 600,000 euros with a 540,000 euro mortgage. The compound, with its gardens and pool, is located at the edge of the mountains, far from the popular barrios in which the party’s leaders had been proud to live, and deep within a zone of suburban privilege. Longtime critics of the corruption of the “political caste,” the couple now faced charges of hypocrisy from adversaries and followers alike. Iglesias’ personal reputation, already tarnished, took a hit from which it has yet to recover.

–On May 17 the perpetuation of the Catalan crisis was assured by the election of Quim Torra to lead Catalonia’s regional government: The Guardian described Torra as a “hardline Catalan nationalist” and “anti-Spanish xenophobe.”  Neither the Socialists nor Podemos welcomed this development, the Socialists because it made efforts to negotiate with the Catalan separatist government more difficult, Podemos because it made their lonely support for the separatists’ right to auto-determination even less attractive than it had already been to the vast majority of Spaniards. So unattractive, in fact, that the party tried its best not to address the Catalan crisis in its recent campaign.

–On May 24 after years of investigation and deliberation, the Audiencia Nacional, Spain’s highest criminal court, convicted 29 Spanish politicians and business-people in the Gürtel case, a huge corruption and payoff scandal centered on the ruling Partido Popular. The court also ruled that the PP itself had played a role in the kickback scheme since 1989, with its officials and members in Congress receiving regular “sobresueldos” (“over-salaries’) from a slush fund fed by leading business interests and administered by the party’s treasurer.

–On June 1 the Socialist Party, with help from Podemos, Basque nationalists, and Catalan separatists, used these convictions to bring down Mariano Rajoy, the Partido Popular president of Spain, through a vote of no-confidence, thus successfully concluding a struggle that began with the eruption of massive protests against austerity and corruption by the Indignados movement back in 2011.  The no-confidence measure, initiated by  PSOE, also stipulated that Sanchez should succeed Rajoy as President, and so he did.  But his PSOE-led government commanded only 24% of the seats in Congress. He would have to turn to his right (Ciudadanos) or left (Podemos) for allies.

–On October 11, 2018 Sanchez confirmed what was already fairly obvious, that his choice was to turn to the left. The Socialists and Podemos signed a Pact that included a new national budget and more: a substantial hike in the minimum wage, a restoration of slashed pensions, tax increases on multinationals, and rent controls It also contained a generous investment package for Catalonia, one of several measures designed to persuade Catalans to abandon the independence struggle.

–On December 2, regional elections in Andalucia, a long-time PSOE stronghold, dealt the party a heavy blow. The Socialists’ loss and Podemos’ weak showing, combined with the sudden emergence of the ultra-right Vox Party, shook the confidence of the left. But the results spelled trouble for the conservative Partido Popular and the center-right Ciudadanos as well. They took power in Andalucia after decades of socialist rule but only with the help of VOX, and their public association with that francoist, sexist, and xenophobic party alienated many in Spain.

–On Dec 21, the Socialists, with the help and prodding of Podemos, stuck to their word and passed by “royal decree,” that is, without a vote in Congress, legislation that raised the national minimum wage by a dramatic 22%.

–On January 17, 2019, the fifth anniversary of Podemos’ founding, Íñigo Errejón, a cofounder of the party and leader of its more moderate wing, bolted the Podemos ticket for the Madrid region and allied himself with Manuela Carmena, the city’s highly regarded left wing mayor, who after numerous battles over control of the local party apparatus had founded her own electoral platform, Mas Madrid. The blow reconfirmed the existence of profound divisions within Podemos and between it and its municipalist and regionalist allies. Commentators began to speculate openly that the party might collapse.

–On February 2, Pedro Sanchez broke off efforts to win support for his anti-austerity budget from  the Catalan separatist parties that had helped him come to power but now demanded in return that he support their right to take Catalonia out of Spain by the route of a regional referendum. On February 13th  his budget went down to defeat and he was forced to call for new elections.

“We haven’t been able to change Spain,” Sanchez told supporters. But “we have set the course towards a fairer Spain.” Now we shall see whether PSOE, alone or in coalition with Podemos, will be able to follow this course and where, in fact, it will lead.  Among the obstacles the Socialists will face are how to check the fratricidal tendencies of the parties and movements to their left, starting with Podemos itself; how to negotiate with Catalan separatist parties that still demand independence even though in the April 28th  election they once again failed to achieve a majority of votes within Catalonia itself; how to rebuild Spain’s impressive  “estado de bienestar” in the face of ever more ruthless international economic competition; how to square foundational commitments to human rights and solidarity with the emerging popular imperative to control immigration; and how to reconcile the requirements of the market system with the aspirations of people everywhere for igualdad, seguridad, and life abundant. The Socialists may have set a course towards fairness, and may already have made some progress in that direction, but many fear that their navigational know-how and the charts they are using are seriously out of date.

Susan Watkins’ 2016 New Left Review editorial, “Oppositions,” comes to mind in this regard. The opposition movements Watkins evaluates include Corbyn’s Labor Party, Bernie Sanders’campaign, Alexis Tsipras’ Syriza, and Podemos. Watkns finds things to admire in all of them, but worries that none are squarely facing the most difficult economic obstacles to the achievement of fairness. “On the economic front,” she writes, “all are united in condemning austerity.” But “none so far has tried to grapple with the scale of the . . .  problems facing the world economy . . . which would seem to render ‘sustainable growth’ unfeasible on capitalist terms.”  Watkins is speaking specifically of “profitability” problems, and these are deeply disturbing. But god knows there are additional economic, environmental, demographic, and ideological problems that many of us can hardly bear to face. Let us hope that the leaders and thinkers of the left will have the courage to grapple with these problems, the intellectual acuity to determine how they can be mitigated, and the rhetorical ingenuity to mobilize the democratic masses for the struggle.

John McClure is Professor Emeritus of English at Rutgers University-New Brunswick. His most recent book is Partial Faiths: Post-Secular Fiction in the Age of Pynchon and Morrison (2007). He is a resident of Spain for half of each year.