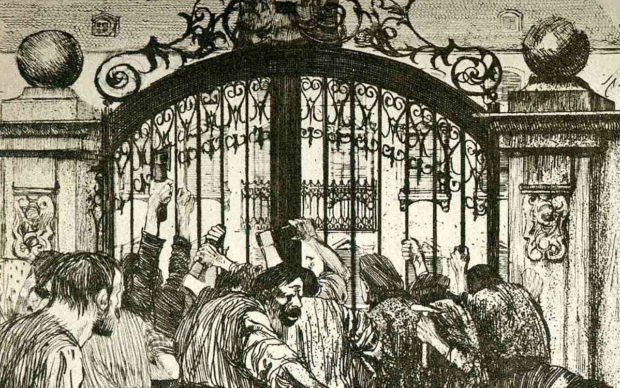 Refugees and the Fate of Europe

There are people who are afraid of insects. If they think there is one insect in the house, they can’t sleep.  It gets to the point where they lose a night’s sleep whether an insect is in the house or not. They are in a state of perpetual alertness, wondering compulsively whether they have taken appropriate measures to repel the invaders.  If by chance even one insect does get into the house, the greater part of their creative time will be taken up with devising defensive plans.  The display of anxiety, worry, and irritability has nothing to do with the scale or even the actual existence of the danger. That’s why phobia is pathological. Ordinary people have a reason for their fears. The phobic don’t.

This is how I see the European Union dealing with the immigrant problem today. Hypochondria has become phobia, and phobia leads to an anti-immigrant and anti-refugee frenzy and in general to irrationality. We are talking about true political irrationality. The European Union is flirting with its own dissolution and its own fascistic tendencies out of fear of repeating the summer of 2015.  Let’s not lose our minds here: there is no refugee crisis in the European Union!  It’s not that we have a lot of refugees. It’s that we don’t want any.  These are not the same thing.

How else to explain the European Union’s mania for hermetically sealing its external borders?  What is it that led the European Council, recently, to “invite […] an examination of the idea of regional departure platforms”?  What else can “regional departure platforms” be but a new Spinaloga[1] for immigrants?  Imprisonment in all its splendor.  What we are (or ought to be) ashamed of is now becoming an explicit political goal.  Let’s shut them up far away so we can’t see them.  Platforms, like the oil platforms on the high seas.  Big new hot spots.  Detention camps in the sending countries, so that the E.U. can do its sorting there. These are the scenarios.

From the Geneva Refugee Convention of 1951—the best humanity has done for refugees–we have passed on to the Dublin Regulation, where the E.U., in order to protect its cohesion, puts all obligations on the first state of entry, that is, Greece, Italy, and Spain.  It’s that Regulation that we are fighting to get rid of without adequate balance of support in the E.U.  In effect, “Dublin” never worked right.  The rule is so rigid that to doesn’t fit any reality. For that reason, Germany is initiating bilateral agreements with the countries of entry so as to ensure it can return to them some asylum-seekers, offering in cynical exchange the possibility that families which had been separated might be reunited.

And this because the Christian Social Union Party of Bavaria sees a danger from the Alternativ für Deutschland in the autumn elections.  The AfD is now preparing a Europe-wide agenda.  We are flirting with the agenda of the German offspring of the Nazis, with the populist far-right rhetoric of the new Italian government, with the Hungarian Prime Minister and with other such powers, supposedly in order to “save” Europe. Thus, from the Geneva Convention we have found ourselves with the Dublin Regulation, and we have signed the Agreement with Turkey, which unethically buys Europe’s complicit silence about a complete turnaround in its commitments to refugees.

From the “Common Declaration” with Turkey– and with the islands of the eastern Aegean where we keep people until they can get the message that they are not going anywhere– we went to Libya and Tunisia.  New Mediterranean partners… Berlusconi had tried it earlier with the late lamented Qaddafi, but at that time such agreements still seemed inconceivable.  At this point, the E.U. wants to keep people in sub-Saharan Africa.  The new destination of the E.U.’s funding is Niger, another pariah-state doing the dirty work of keeping people below the desert… That’s how far we have fallen: blocking them from crossing the Sahara.  And if they happen to leave their bones there, we won’t even know.  The desert leaves fewer traces than the sea, whether in reality or in liberal European consciences.

In this way, however, European consciences stop being liberal.  That’s how it happens.  Fascism is not some political extraterrestrial that lands in Europe, it’s Europe’s own child.  The E.U. has fully accepted the theorem according to which, supposedly, in order to avoid having fascists we have to avoid having migrants.  Out of fear of far-right anti-European discourse, we incorporate its assumptions, and the result is catastrophic damage.  That’s what happened in 1930 and that–in a different environment–is what’s happening now. We are simply waiting for Merkel to fall so that Germany too will suffer what happened in Central Europe, in Austria and in Italy.  By then, however, the innocent bird of European unity will have flown away.

The View from Greece

Since the end of October 2015, when Germany announced that it was retracting [?] its policy toward the flow of migrants, it became clear that the sealing off of the “Balkan corridor” was only a matter of time, which would have as logical consequence the hemming in within Greece of a considerable if less than gigantic number of human beings. The Agreement of the EU with Turkey in March 2016 gave an official seal of approval to this disfigured  situation.

According to the UNHCR (the UN’s refugee agency) there are somewhat fewer than 60,000 refugees and migrants in Greece today out of those who began to arrive with the great wave of 2015, while 1,600 individuals have returned to Turkey thanks to Turkey’s agreement with the E.U.  What will happen to those who remain?  What will they do in Greece?  What will Greece do with them? Will a program of “accommodation and cash” be claimed by Greece forever? What will come of that?  The question is not about some future time, it is about the absolute present and it appears insurmountable.

It has two roots.

The first root was the naive confidence that the country would remain perpetually the ideal transit point of the flows from the East to the European North.  Even when the signs were multiplying that Greece would revert from the generous traffic cop of the flows into a humble warehouse keeper, the prevailing conscience of society or of the state did not seem to comprehend it.

If the country’s political leadership had seen in a timely fashion– already in the beginning of 2016– that hereafter, for an unpredictable amount of time, refugees and migrants  who remained would not leave, it could have taken its measures, first and foremost the working out of an honorable, austere, courageous political message to incorporate them.  But Greece was not so inclined, it was not ready to send out that message, which would have meant active public policies of inclusion: mandatory lessons in the Greek language for young and old, adult education, assistance in entering into an extremely fragmented labor market, measures which would possibly contribute to the economic revival of an abandoned countryside, and many other measures. And this because such policies would be coming in opposition to the common conviction that “people don’t want to stay in Greece” and because the promise of social accession conflicts with the political plan of the E.U., which is to repel the flows, not to encourage them. Thus valuable time was lost. The E.U., which offers lavish financing, cares little about social integration of the refugees and migrants into European society.  It’s enough for Greece to hold them, and hold them back.

A second root of the problem has to do with the way in which the UNHCR managed the role of de facto subcontractor of the E.U.  It accepted the role of expediter/go-between in realizing a political plan whose dominant function was not protecting the refugees, but preventing their flow by putting up dikes.

I recognize that since Greece never planned to incorporate the migrants, it would not have been easy for it to oppose the cynical designs of the European Commission. However, it was obliged to be stricter about the conditions of its cooperation with the EU. But it wasn’t. Under these circumstances, the housing and financing program realized by the UNHCR functioned substantially as a dystopian mechanism of institutionalization of these people. Meanwhile, time passes at the sacrifice of them being weaned off of subsidies for housing and cash. It’s not hard for anyone to understand that to pay people to sit and wait pointlessly to leave the country does not lead anywhere. The longer this situation lasts, the more the hostage condition of the migrants and refugees becomes entrenched. The evil is this: the hesitation to confront a complex problem has produced a problem which appears insoluble.

At the same time, as we said at the outset, the messages from the E.U. are devastating.  From the beginning of 2018, 45,000 migrants and refugees have crossed the Mediterranean.  I leave the question of whether this number justifies the hysteria that we observe to the sagacity of each and everyone.  The reason for the policy of refoulement, of warding them off, is not in order to deal with what is called abusively the “refugee” or “migrant crisis”– in reality, a non-existent phenomenon, as I have said many times; it’s actually a “crisis of reception”– but the falling back into nationalism and xenophobia of many European governments and the generalizing of the “not in my backyard” syndrome.  As happens, more or less, with garbage. In fact some are already saying it outright.  This is surely fascism.

I see Europe, unaware, fatally degenerating and collapsing.  Now, if we ask ourselves whether this Europe merits a better fate, I will answer that what I care about is the possibility of living in peace.  As Brecht said, it’s the people that matter first, not the nations. The European nations, however, every time they have been led by nationalist zeal, like today, have brought disasters for peace and for the lives of their people. The Prime Minister of Hungary just declared: “For 27 years we, in Central Europe, believed that Europe is our future.  Today we feel that we are the future of Europe.”  From his point of view, he’s right.  If we permit him to have his way, we will lose, and we will be lost.

[1] A small island off of the cost of Crete where lepers from all over Greece used to be kept in isolation from the early 20th century until 1957.

Dimitris Christopoulos is President of the Paris-based International Federation of Human Rights -- the first non-native French speaker to be elected to this office. He is also professor of state and legal theory at the Department of Political Science and History of the Panteion University of Athens, where he has taught since 2003. With Kostas Tsitselikis, he co-founded in 1996 the Minority Groups Research Centre (KEMO), the first Greek independent think tank on minority issues involving migrants and minorities (www.kemo.gr). He is the author of numerous books and articles on minorities, rights, citizenship, and related subjects.