On Street of the Prophets

The apartment I rent is in Nachlaot, the quaint collection of small West Jerusalem neighborhoods founded in the 1880s for Jews who were moving outside the Old City walls. It sits next to the flourishing market, now the living center of Jerusalem’s food culture, fresh produce, and nightlife. The market exudes Levantine cool; a recent addition is an evening-time bar called tahrir. Every morning, I take the short trip to my office in East Jerusalem walking down Street of the Prophets.

Street of the Prophets—with its historic international feel, stately old houses built mostly around the turn of the twentieth century, and Christian and Jewish institutions hiding behind high protective walls or elaborate iron gates—is quite a pleasant route for a morning walk. Its name was given to it in British-mandate Palestine, as it was thought acceptable to Jerusalem’s three religions. Do not imagine it, however, as a pristine, preserved row of former consulates and diplomats’ residences, but more as a mishmash of such grand houses sitting alongside crumbling structures laced with graffiti, more or less ugly modernistic government buildings, and new, luxury developments stretching along a narrow road where waves of traffic and buses rise and fall.

As I turn onto Street of the Prophets from HaDavidka Square, I count the number of tram stations in Jerusalem with overtly militaristic names. The Air Force. Ammunition Hill. HaDavidka Square is named for a type of mortar launcher invented by a man named David Leibovitz and used by the Haganah in its military operations in Jerusalem in 1948. It is not unlike the Qassam rocket that Hamas and other militant groups in Gaza have been launching at Israeli towns since 2001: the HaDavidka launcher is 3 inches in diameter and can launch a rocket weighing 40 kilograms with a range of 300 meters, while a Qassam rocket is 4.5 inches in diameter, weighs 35 kilograms and can reach 3 kilometers away.

Every time I walk to work, I pass by the Christian and Missionary Alliance Church at 55 Street of the Prophets, the CMA Church, where my grandparents lived in 1956. The modest church and its adjoined two-story guesthouse, their windows arched, are built to a human scale. An evangelical reverend who came to Jerusalem from Maine in 1903, Albert Thompson, initiated its building, but Jerusalem’s Ottoman rulers refused to give a building permit to a church. As my grandfather told me, grinning, a permit to build a Turkish bath was then requested, and granted, in 1908. Up until 1948, the church—then the International Evangelical Church—served as a religious home to a congregation of mostly Arab Christians, Europeans, Americans, and perhaps a few Jewish converts who worshipped here side by side. When the church remained in Israeli-controlled West Jerusalem after the war, its congregation left it and moved to pray in a second CMA church in the Old City.

It was in the basement of 55 Street of the Prophets that my grandfather and grandmother lived in June 1956, when she was nine months pregnant with my mother. He was doing odd jobs for the church in exchange for a place to live and a meager salary; she was in the middle of doing the washing, by hand, when her water broke. She first finished doing the washing. Then she got up, called her husband, and, leaning on my grandfather’s shoulder, walked a few hundred feet down the street to the hospital Bikur Cholim, where she gave birth to my mother. Though it was just a few minutes’ walk away down the street, it took a while since with every contraction she had to stop and breathe. It was midday. Bikur Cholim means roughly “visitation of the patients,” which I always found to be a curious name when I was a child.

On the adjacent lot, where the house at 57 Street of the Prophets used to be, there is nothing. A fenced parking lot. If it had still existed, the villa there would have been at the intersection of Street of the Prophets and the street now named after Raul Wallenberg, a Swedish diplomat who saved tens of thousands of Hungarian Jews from the Nazis in the 1940s. In 1956, when my grandparents still lived in Jerusalem, that house was in state of disrepair, sitting adjacent to the church.

The three-story stone house at number 57 was built in the nineteenth century and bought in 1880 by the imperial German government to serve as its consulate in Jerusalem. In 1933, as was the case with all official German buildings, a swastika was raised at 57 Street of the Prophets. Heinrich Wolff was then the German consul in Jerusalem. Because his wife, Ilse Wolff—an active member of the German protestant community—was of Jewish descent, an “investigation” by members of the Nazi branch in Palestine led to his dismissal in 1935. The flag stayed—until 1939, when the Germans closed the consulate building, which was then seized by the British when the Second World War broke out. In British-mandate Palestine, the building came to house the Department of Labor.

On August 5, 1947, members of the militant Zionist Irgun engineered an explosion at the Department of Labor that killed three British policemen and hollowed out the center of the building. After 1948 the building was used by the state company Israel Military Industries and then by the ruling party Mapai, until it was completely demolished in the 1970s to make space for the parking lot. 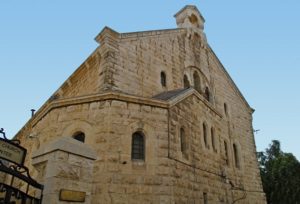 Number 57 was not the only building on Street of the Prophets that witnessed or embodied that fall. The cosmopolitan street, which at the turn of the twentieth century was lined with embassies, hospitals, schools, and enviable walled and gardened villas, became a stale river cut from its spring. Built to rise up west from the Old City’s Damascus Gate, the street was dammed by the no-man’s-land at the center of Jerusalem: a tangle of fences and armed guards tucked up against an impoverished residential neighborhood of immigrant Jews housed in formerly Palestinians homes.

I keep walking, thinking about my diminutive grandmother, nine months pregnant, straddling down the street to the hospital. And the irony of my Christian grandmother giving birth here, since Bikur Cholim was the second Jewish hospital to be built outside of the Old City walls, in 1867, so that Jews would not be pressed to go to missionary hospitals.

My mother, born Christian in Jerusalem but, to her mind, a foreigner in its homogenous political body, converted to Judaism at an orthodox rabbinate. Wanderers and converts, particles that separated from their native collectives, like the Biblical Ruth, tend to eventually attach themselves to another tribe, and my mother attached herself to what has been recently dubbed “The White Tribe” of secular Ashkenazi Jews, that shrinking educated, well-off, Zionist and liberal elite that is slowly but surely losing its hold on Israel’s reins.

That particular lineage was not the one I wanted to carry down the ages. The Israel I was seeing inside the Green Line and across was turning racist, drunk with hubris, and worse, blind to its own role in the downward spiral. Unwittingly we carried on the bitter argument between Gershom Scholem and Hannah Arendt, when he accused her of a lack of “love of Israel,” to which Arendt answered: “I have never in my life ‘loved’ any people or collective—neither the German people, nor the French, nor the American… I indeed love ‘only’ my friends and the only kind of love I know of and believe in is the love of persons.” For my part, I felt lingering disappointment that the liberal rhetoric was so out of synch with observable reality. But at least I did not feel like it was too late to find, like my grandparents had, a piece of earth to feel optimistic about, an adopted homeland of my own.

When I circle back daily past the birthplace of my mother, there is something like a barely perceptible buzz under my feet, the closing of a circuit. I arrive at her beginning. I continue down Street of the Prophets towards Palestinian East Jerusalem, and now I am alone, leaving my foremothers behind, the colorful ghost of my grandmother like projected video art on the hospital’s wall, waving me goodbye worryingly, fondly, my mother’s voice fading in the distance.

My morning walks to the office near their end here, at the edge of Musrara, once an upper class Palestinian neighborhood, then a poverty-stricken Jewish one that became the seedbed of the Israeli Black Panthers in the 1970s. Musrara, this place is called, though Israeli authorities tried to change its name to a Hebrew one that no one uses. Musrara: abundantly graceful. In a sad story of a successful social protest eliciting improved government services and neighborhood rehabilitation, which in turn instigates gentrification and push out, Musrara is now in many parts renovated, gorgeous, out of reach—like a manicured Palestinian village in some kind of dream.

Just a few steps more, and I have reached the Green Line. Fifty years ago I would have been at the edge of “enemy territory.” People across the border would have only glimpsed one another from a distance from time to time, mostly not. Now the road that is where the border used to be is crossed each day thousands of times in both directions

If you pay attention you will probably notice that as dusk draws near, in a sort of retreat, Palestinians walk east, Israelis walk west. I step over the invisible line where the no-man’s-land had started. Under my feet would have been landmines. What was once an impermeable border is now a four-lane road, and one has but to wait for the pedestrian light to turn green. As I cross the street, it occurs to me that it is those who accuse others that they do not belong here who are actually rootless or at risk of being uprooted.

Lisa Benisti is a pseudonym.