Interview with Ross Posnock on his new book, Renunciation 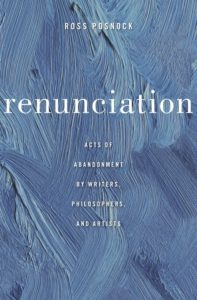 James Livingston: You write about renunciation as an act in itself–not as abstention from the world but as a “creative” gesture that pleads for “intimacy.” Can you explain how renunciation works in your purview?

Ross Posnock: As I stress at the book’s opening, intuition guided me from the start; I knew I had passionate interest in certain ideas and writers and painters that for years I had been reading about, but only very gradually did I find the frame—renunciation—that would enable me to bring these ideas and authors into the same arena and into interplay with each other. And the first thing I realized once renunciation floated into view was that it needed rethinking, even overhaul, because conventionally it meant only negativity, sterility, withdrawal. And the renunciation that was assembling itself for me was not flat and one dimensional but active, creative in its very negativity, a mode of being in which creativity flourished. What I mean is that, for instance, we all know that Salinger renounced publishing, withdrew into silence. But that flat fact doesn’t suggest that his post Catcher fiction—the Glass family stories—is explicitly about renunciation— about young intellectuals who renounce success, about Buddy Glass’s renouncing (in Seymour: An Introduction) conventional story telling and finding alternatives in the renunciations offered by Zen. So in making renunciation not merely a biographical fact but the subject of his art, Salinger in effect was making renunciation a creative force. Then I discovered variations on this—writers who flatly renounced for a quarter century—for instance, poet George Oppen—and then returned to poetry but not ignoring their act of renunciation but turning it into a compositional principle of their art. A renunciation of metaphor, of artiness, of the conventionally “poetic.” Paul Celan, after the 2nd world war, created a similar renunciatory aesthetic as a way to write answerable poetry in the wake of the holocaust. Abstract painter Agnes Martin abruptly quit for 8 years then started up again making renunciation her compositional principle and the theme of her poem-essays. Once I began to see beyond renunciation as simply biographical event and see it as operating simultaneously as a compositional principle, then I realized the concept was rich enough to bear sustained examination.

JL: You write about every conceivable discipline from the 20th century. Well, OK, mainly novelists and philosophers. With some visual artists in the mix. and two musicians who changed the world. J. D. Salinger makes a necessary appearance here–we could expect that–but so do Glenn Gould, Agnes Martin, Ludwig Wittgenstein. How did these people show up? Did you have criteria of selection, or did they approach you?

RP: My longstanding interest in pragmatism eventually led me to Wittgenstein, a virtuoso of renunciation in every conceivable way. I was drawn first by his admiration for William James—as human being (hence, by the way, Wittgenstein’s warm regard for Varieties of Religious Experience, where William’s temperament is fully on display, as are his pleas to grant dignity to poverty and ascetic withdrawal, music to Wittgenstein’s ears. Soon after reading Varieties he renounced his large inheritance) and as psychologist (The Principles of Psychology is one of the very few texts he explicitly engages in Philosophical Investigations) and then, with the help of Linda Zerilli’s great essay ‘Doing Without Knowing,” to his last book “On Certainty.” Here Wittgenstein acknowledges he is writing what sounds like pragmatism but he refuses its “’weltanschaung.’” I was intrigued by the book’s insouciance regarding language (given Wittgenstein’s stature as a philosopher of language), for he understands certainty as a doing ungrounded in cognition, evidence, knowledge, and language which he calls “a refinement” for ”‘in the beginning was the deed,’” as he quotes Goethe. Certainty requires no justification, it is there, “like life.” I was intrigued too by the fact that the great god Cavell had carefully ignored On Certainty, perhaps because it so decisively dispenses with skepticism, hence preempting the extended anguish over skepticism that fuels much of Cavell’s work. (Yes I am being crudely polemical here).

JL: In many of your case studies, if I may call them that, renunciation seems to mean the refusal to represent, as per the logic and the imperative of modern visual/pictorial art. Is that what you’re getting at? Are you suggesting that the hieroglyphics of a new speech (Bram Dykstra) have spread to the point of ubiquity? Or are you and your subjects quarreling with a correspondence of truth?

RP: The compelling insouciance of Wittgenstein’s “primitive” certainty linked him, in my mind, to Nietzsche and to Emerson, two figures I was teaching in a seminar. All three refused the primacy of deliberative rationality and were also, in their careers, renunciators. So here a nexus formed for me between the anti-Cartesian, anti-epistemological and non-cognitive thinking of my key figures and the fact of the renunciatory. This affinity became the key nexus in the book because I connected their ease with the non-cognitive (with what Emerson calls whim & abandonment—modes of acting without why) to the aesthetic, both as it appears in Kant’s notion in the 3rd critique of an “aesthetic idea” as resisting the fully intelligible and, more generally, with a famous piece of folk poetry, the 17th c mystic Angelus Silesius’s “the rose without why.” This little couplet circulates up and down Western culture—first in Meister Eckhart in the 14th c then in Leibniz, Hegel, Emerson, Wm James, Wittgenstein, up to Heidegger, who devotes much of a book to it. The indifference to explanation—lavishly expressed in Emerson & Nietzsche and basic to Wittgenstein’s Investigations— had long intrigued me as a sine qua non of the aesthetic. And to be able to make it central to the thought of many of my renunciators was particularly fun.

JL: Your passages on Wittgenstein are quite powerful, even funny and moving. I wonder if you would indulge my parochial interests, and speak here to the affinities between he and William James, despite the intervening presence of Bertrand Russell. I knew The Principles of Psychology was the only book on Wittgenstein’s shelf for a year. I didn’t know The Varieties of Religious Experience was equally important.

RP: Speaking of which: As H James once said in a late preface, “it all comes back to mine and your ‘fun,’ if we but allow that word its full extension.” MY effort throughout was to have fun by writing something that did not have to be obedient to standard expectations. As a specialist in American literature, I would be expected to treat renunciation as an American topic, and indeed it would be quite easy to write a book on the great American renunciating authors, Hawthorne to H James. So I avoided (but not ignored) this easy option. It lacked challenge and difficulty. I had grown increasingly impatient with the professional obligation of specialization (an impatience nurtured by the graduate school I went to, where we were simply told to “read everything”), which I had never really obeyed anyway. My dissertation brought an American novelist and British poet together and I would bring H James into the ambit of the Frankfurt School in my 2nd book. So Renunciation is simply extending this longstanding need of mine. Inspired by a renunciatory spirit, I decided to ignore endnotes & footnotes and chapters as well. Ideally, the book would have been one long essay, undemarcated. But publishers won’t allow that, especially in a work of substantial length. So I set it in “parts” rather than chapters (the difference being the formal, sustained pause signified by “chapter”), to minimize rest and maximize flow. Freedom to be associative was what I sought and to fasten attention on the argument at hand rather than disperse attention to footnotes. The citation and summary of previous critics had grown tedious, and energy sapping, especially when one’s primary figures were so demanding. So dispensing with notes was part of an effort to modify the tug of professional expectations. I regard the book as an essay—an experiment, an attempt, indifferent to the definitive–rather than a scholarly treatise.

JL: Writing about renunciation is something like entertaining Satan–it’s like explaining writer’s block to a writer who happens to be yourself. Did you ever have any qualms about plunging this deeply into a subject that terrifies all of us?

RP: Perhaps I insist on this distinction as well to modify/refuse the demands of intellectualism (belief in the primacy of rationality and representation, as erected on a correspondence theory of truth) that I found far too dominant in a profession allegedly devoted to the special domains of literature & the aesthetic. This is part of my book’s veiled but visible critique of certain unfortunate anxieties about aesthetic experience that are evident in the English professoriate and in postmodernism in general. The aesthetic and the spiritual, I discovered from my figures, are often deeply entangled as twin acts of faith, and this breaking of the circuit of rationality, is basic to feeling the force of aesthetic faith. But of course to speak even vaguely of faith and the spiritual is a ticket to oblivion. (And this is so in a professional culture proud of its distrust of Enlightenment!) In the profession, historical context reigns as the anchor of our work, acting in effect as the mature sober father who will always rescue the straying aesthetic child from gaining too much freedom. The anxiety over the aesthetic is not wholly misplaced; indeed it does present a crisis of cognition, as Kant & Emerson and others show. But to react to the anxiety of the aesthetic by clinging to HISTORY & CONTEXT is part of the reason literature has such low cultural esteem outside the academy, a condition that begins in the academy. And this clinging is evident in recent works that seek resolutely to be emancipated from the privileging of context—see Rita Felski’s recent The Limits of Critique for a signal instance.

JL: The “logics of abdication” you chart have different consequences–joy and energy, to be sure, but also destructive impulses. Would you venture an explanation of this ambivalence?

RP: My downsizing of context in Renunciation is a small protest. Doubtless, my little acts of rebellion contained some mimetic element as well, given that I was writing about figures of spectacular recalcitrance. A mimetic element is always hard for me to resist; I find that inevitably, unconsciously, I am taking on the cadences, the rhythms, the temper, of my subject matter. I can’t appreciate save by intimacy, as Henry James said, and something of that logic guides me (more mimesis). My goal (too rational a word) in Renunciation was to create, to borrow Adorno’s words, “an open intellectual experience” and my description in these pages above is of how I groped toward doing so.

James Livingston is Professor of History at Rutgers-New Brunswick and the editor of P/L.  His last book was Against Thrift (2011); his new book, Fuck Work, will be out soon from UNC Press.