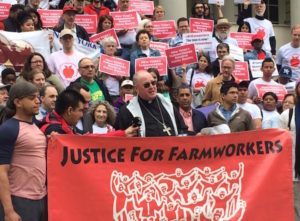 Crossing the Brooklyn Bridge on May 21, 2016 with “Justice for Farmworkers” banners, the 200 marchers caught a glimpse of the Statue of Liberty and her salute to new immigrants. She was one of the many raising an arm in solidarity for those traveling on foot from Suffolk County on Long Island to the state capitol in Albany, New York.

This 200-mile journey with 15 core members and hundreds of allies joining in to march is an appeal to the New York State Senate to consent to equal right for farmworkers; the Assembly has been supportive for years. New York State, along with most other states, follows the federal standard and excludes agricultural workers from certain labor rights including the right to a day of rest, the right to overtime pay, and collective bargaining protections. 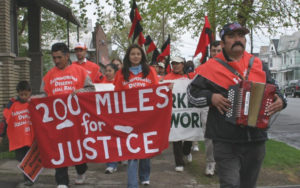 Along the march, I listed to one unemployed worker whose workplace injury required surgery and was denied workers compensation. Some workers discussed their grueling schedules, low pay, and the pressure to work quickly doing dangerous tasks. Another argued that New York should be embarrassed that the law treats farmworkers as a lower class of employees and opens the door to labor abuses.

Workers’ stories matched what I had discovered in my own research on Hudson Valley farmworkers. I found to my surprise that the labor regimes on local and smaller farms, where shoppers in farmers’ markets no doubt would have expected something different, were in fact very similar to those on factory farms. Many workers felt disrespected, devalued, and at the same time afraid to question their conditions. Farmers and their interest groups argue that if workers return to the same farms year after year, they must be happy with their jobs. Many workers told me the opposite—if they didn’t leave, it was out of concern that the next farm would be even worse. 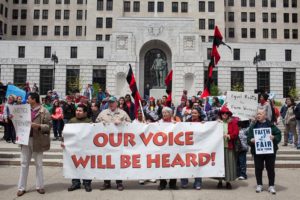 What was unique in this local agricultural region was the paternalism that developed between workers and growers. This paternalism served up real benefits to workers, for example free housing, the use of farm vehicles, and farmers helping them navigate medical or legal issues. Workers were grateful for such benefits and felt protected by their bosses, another reason why they stayed.

Paternalism, however, also functions as an important and effective system of labor control that creates a workforce reluctant to point out problems. These paternalistic relationships are a result of the small scale of farming and the intimacy that develops between bosses and their workers. Indeed, this is the flip side to the intimacy promised between farmers and consumers through farmers markets, CSAs, and other direct sales. 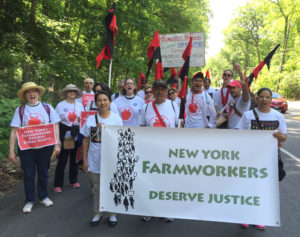 Once on the Manhattan side of the bridge, the marchers gathered on the steps of City Hall. With a small throng of press, the marchers cheered as they heard the support of the bill’s sponsors, along with Carlos Menchaca, the first NYC Mexican-American Council Member, Kerry Kennedy, and Cardinal Timothy Dolan. The Cardinal tapped into Lady Liberty’s message: “This is about a sense of welcome and inclusion.” He went on: “This is about as apple pie as you can get. By the way, we couldn’t get the apple pie if these guys weren’t picking the apples, alright? This is American. This is for me very Catholic. This is for me very Biblical.”

Donna Lieberman, Executive Director of the New York Civil Liberties Union, also took the podium. Her organization recently filed a lawsuit against the state charging that the right to organize and collectively bargain is guaranteed by the state Constitution and, as such, the labor law that excludes agricultural workers is unconstitutional.

These efforts to change the law and challenge the New York Constitution will only be effective with public support and foodies and food movement actors would be natural allies. Consider that at its heart the food movement is an education campaign. Its goals are to bring us back to a more natural way of eating and one that does not line the pockets of corporate executives. It helps us make good decisions about what we eat and how we think about what we eat. That environmental and animal concerns are at the forefront of food ethics speaks to the effectiveness of the food movement.

The food movement logic promotes a close examination of sustainability in the food chain. As such farmworkers should be an obvious concern. We have seen a small increase in the attention paid to laborers—including support from Michael Pollan. But at present improving workers’ conditions does not seem as important to the public as protecting animals and promoting the livelihoods of smaller farmers.

When the marchers arrive in Albany on June 1st for the annual Farmworker Advocacy Day, they hope that their journey will have convinced some New Yorkers that their plight is worth addressing.

Margaret Gray is an associate professor of Political Science at Adelphi University and author of Labor and the Locavore: The Making of a Comprehensive Food Ethic (University of California Press).