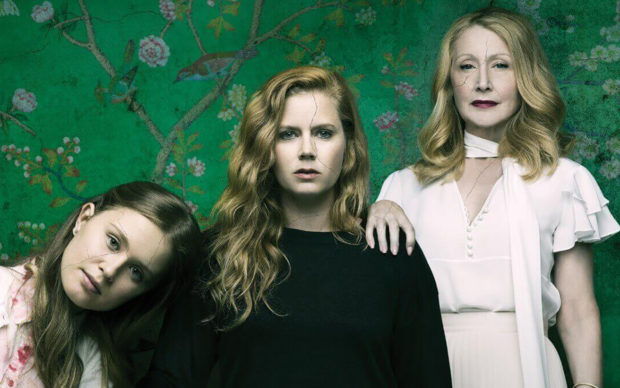 Fans of HBO’s Sharp Objects or the Gillian Flynn novel of the same name will remember the story’s “woman in white”—a ghostly figure that has reportedly been seen with one of the young girls whose brutal murders drive the story’s plotline. Flynn depicts Camille Preaker, a crime reporter whose editor sends her back to her home town, Wind Gap, to suss out a grippingly lurid crime: an unknown perpetrator has murdered two little girls and then, post mortem, extracted and absconded with the girls’ teeth. Camille, played by Amy Adams in the HBO series, finds it difficult to get the cops to comment, but draws a description of a “woman in white” out of a young boy who claims to have witnessed the kidnapping of the second girl, Natalie Keane. Natalie is beckoned into the woods by a woman who “was wearing a white bed dress with white hair. She was just all white, but not like a ghost.” Flynn herself, in a Hollywood Reporter interview, describes her version of the woman in white as a kind of “original Slender Man,” a figure from an urban legend told under cover of darkness after the grown-ups have gone to bed and children’s imaginations are free to run recklessly rampant. But the inspiration for Gillian Flynn’s Woman in White—as well as for other aspects of Sharp Objects—may have come from a more tangible source than an urban (or suburban) legend.

Flynn hints at this more tangible source in her short story “The Grown-Up,” which tells the tale of a self-described hand-job maven who, sadly struck down by carpal tunnel syndrome after years of impeccable service, is transferred to front-of-house to work as a medium. She only returns to her old duties for her favorite clients, one of whom introduces her to several Gothic novels including Shirley Jackson’s The Haunting of Hill House, Henry James’ Turn of the Screw, and Wilkie Collins’ The Woman in White. In a more mischievous mode of name-dropping, Flynn denominates the well-read beneficiary of these exclusive hand-jobs “Michael Audley,” the full name of the Lord Audley who is the target of his wife’s psychological—and, presumably, digital—manipulations in Mary Elizabeth Braddon’s Victorian Gothic and “sensation” novel, Lady Audley’s Secret.

The Woman in White, penned in 1860 by Collins, an acolyte of Charles Dickens, became so wildly popular that the novel spawned a cottage industry of distinctly non-literary spin-offs, including a dance step called the Woman in White Waltz, a Woman in White brand of perfume, and Woman in White bonnets and dressing gowns. Collins’ novel, despite its reputation in some circles as scandalous, permeated even the idealized realm of Victorian domesticity, with the names of Collins’ protagonists adorning more placards on baby carriages by the day.

The Woman in White tells the story of three half-sisters—Anne, Marian, and Laura. Laura and Marian share the same mother, while Anne and Laura—unbeknownst to the reader as well as the characters themselves until deep into the novel—share the same father. Although the outer, physical resemblance between Anne and Laura is striking, their interiorities and prospects are distinctly different: Anne is the novel’s titular Woman in White who, when we first meet her, has just escaped from an insane asylum, while Laura is, by all accounts, a sweet and docile young woman who is due to acquire a great fortune upon her coming of age. Collins’ initial description of Anne seems to have helped shape Flynn’s own Woman in White: Anne is “a solitary Woman, dressed from head to foot in white garments,” who, much like the woman Flynn describes, makes a “sudden appearance” as if out of nowhere into the narrator’s life and into the tableau of the novel.

Sharp Objects is likewise the story of a set of three half-sisters: Amma, Marian, and Camille. Camille, the aforementioned news reporter, is the eldest daughter of the three, and Amma the youngest. At the outset of the novel, Marian, the middle daughter, has been dead for some time: all we know at first is that she was sickly for an extended period before she died. Amma was conceived after Marian’s death—a replacement child—and tries her best to outshine her dead, martyred sister. What we later learn is that Marian fell victim to the three sisters’ own mother, Adora, who has Munchausen’s-by-Proxy syndrome and has been periodically poisoning all three of her daughters with her home-made ‘medicine,’ a concoction of rat poison and ipecac.

So many threads—thin but unbroken, and syrup-sticky like Adora’s ‘medicine’—connect The Woman in White to Flynn’s novel. The names in each triad of sisters are strikingly similar. Both novels feature a sister named Marian, while the names Amma and Anne have visual and aural similarities. The name Camille comes from the Latin cognomen Camillus, which meant “to serve at the altar” or, more metaphorically, pure or perfect. Collins’ Laura is depicted as pure, servile, and docile, and she is forced to serve at the altar of marriage. Laura marries a baronet, Sir Glyde, who schemes to steal Laura’s fortune. Sir Glyde is also the man who relegated Anne to the asylum from which she escapes at the beginning of Collins’ novel. When Anne dies, Glyde drugs Laura and passes her off as Anne to the asylum attendants. The physical resemblance between the two half-sisters is so striking that Glyde is able to “prove”—with Anne’s body—that Laura is dead, leaving him the sole heir to Laura’s fortune.

In the same way that Laura is forced to “play” Anne in the asylum, Amma is forced to “play” Marian, and the jealousy she feels towards her dead sister drives much of Flynn’s novel. Amma cannot escape or eclipse the shadow that her consecrated sister Marian has left behind. The reveal of Sharp Objects (spoilers ahead) is that, like her mother, Amma is a killer. Amma killed the two girls—Natalie Keane and Ann Nash—whose murders trigger Camille’s return to Wind Gap in the multiple and conflicted roles of reporter, sleuth, sister, and daughter. Amma’s victims are described as rebellious tomboys, who are being tutored by Adora because they’re falling behind at school. Amma, jealous of the attention her mother is giving them, kills Ann and then Natalie, and then extracts their teeth to pave the “ivory” floor of her dollhouse—an eerie miniature of the house in which Camille and Amma have grown up.

The Woman in White might be described as an old-school Victorian Gothic novel, while the setting of Sharp Objects places us squarely in the realm of the American Gothic. The rural Missouri town of Wind Gap is Flynn’s stage, onto which she assembles all of the eerie, isolated, and threatening phenomena that lurk in the background of Gothic depictions of small-town America as penned by Cormac McCarthy, Flannery O’Connor, Harper Lee, William Faulkner, and Nathaniel Hawthorne.

Shortly before Halloween 2018, PBS aired the first of a five-part BBC version of The Woman in White, which originally aired in Britain in April. The Guardian and the Telegraph each independently observed that this 2018 BBC rendering of Wilkie Collins’ 1860 novel is geared towards our current political climate, in part because the mini-series’ script seems to overtly reference the #MeToo movement: in one scene, Marian asks “How is it that men crush women time and time again and go unpunished?” In this BBC version, Marian further asserts that she and her sister Laura are “not the most traditional of ladies.” Laura continues: “But we like to learn, and we speak our minds.” In Sharp Objects, however, we’re confronted with the opposite. The reader’s (or viewer’s) discomfiting take-away—our inescapable, unifying remembrance—is that of a gaping, toothless maw: the macabre image of a mouth stripped of both mechanical and metaphoric agency, unable to form words or sentences without the sharp, snapping structure of teeth. So, ladies, and allied gentlepersons: please go see your dentist. You’ll be needing those teeth for awhile, still: to speak, and with those words, to bite.