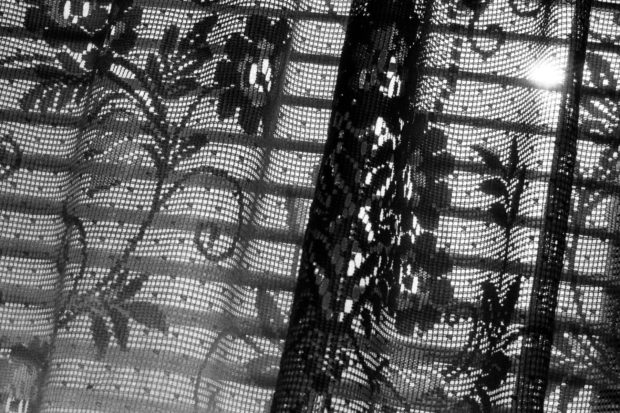 “Where’s all this dust coming from? It feels like all the dust in the world’s in this house.”

“What’s wrong, Ikbal? Why are you complaining again?”

“Dust, Kemal Bey, dust… For nearly a month now I’ve been dusting every corner of this house twice a day. Every evening I rub that cabinet, that coffee table and the furniture in your room till they shine. But the next morning I come and find another thick layer of dust over everything. Do you sleep with the window open in the winter? I swear I can’t wrap my head around this.”

“We come from dust and we go back to dust, Ikbal… Don’t worry, you aren’t the only one who can’t solve the mysteries of the universe,” said Kemal softly laughing.

“I’m saying one thing and he’s in another world altogether,” said Ikbal to herself as she went on grumbling.

On the other side of the living room Kemal Bey carefully halved the boiled egg she had set before him and took a sip of tea. Startled by all the dust billowing out of a set of pillows she was thumping, Ikbal failed to understand how Kemal Bey, who was the owner of the house, could remain so indifferent. He was just as fussy and as fond of cleanliness as his late wife Neriman Hanım. Since the day all this dust had begun mysteriously showing up in the house, Ikbal had no peace of mind. It was exhausting cleaning this four-room apartment from top to bottom every day but it also saddened her to think that Kemal Bey might know something about the dust and was keeping it from her; it upset her because she had come to his house for years, ironed his shirts, made fresh pots of tea. In the first few days she came to the conclusion that he was going senile and she unloaded on her husband Hasan. “In my opinion your old man forgets to close the window at night and when he feels the cold he gets up and shuts it then forgets about it in the morning,” said Hasan. But Kemal wasn’t like that and in any event so much dust wasn’t coming through an open window or door. The days went by. Every night Ikbal left Kemal Bey’s house perfectly clean and when she came back the next morning she found everything covered again. She’d been cleaning this house for nearly twenty years. When Neriman Hanım was alive and well there wasn’t any dust. But her lingering presence that unified the house and her authority over Kemal Bey were so strong that all this accursed dust made Ikbal worry less about tending to Kemal Bey and more about whether she was worthy of inheriting this empire of the home.

When Neriman Hanım, who had no children and no younger relatives, got sick last year she took Ikbal aside and asked her if she could look after Kemal for at least a few hours every morning after she was gone.. In return she offered Ikbal a lump sum of money and the grey car Neriman Hanım loved to drive when she was healthy. Kemal Bey didn’t have a license and she knew the car would just rust away in the garage. Sizing up the expenses for their son’s extra classes that burdened the credit they had taken out to pay the rent on Hasan’s food market stand – and of course because it truly pained her to think of Kemal Bey being left all alone – Ikbal couldn’t turn down the offer. Besides it was nearly impossible for her to turn down any offer from Neriman Hanım. Listening to the doctor describe how her disease was going to stop her heart within a year if she neglected her health, Neriman was more concerned with the idea of Kemal being left alone than her approaching death. On her deathbed she said, “For goodness sake, Ikbal, do pay attention to the cleaning, I don’t want anything to make Kemal Bey feel uncomfortable. Get here early in the morning so you can boil his egg and make his toast and tea. Keep things in order.” Order was Neriman Hanım’s favorite word. And the idea of her established order falling apart was her greatest fear in both life and death.

The dust didn’t bother Kemal Bey but when the strange phenomenon continued for two weeks without a break Ikbal turned detective and began investigating possible origins. First she thought maybe Kemal Bey had developed a passion for amateur woodcarving. She scoured the pantry and all the cupboards, looking for gadgets and tools, but found nothing more than documents, old albums and hundreds of books. Then she went downstairs to tell the superintendent of the building and retired construction engineer Azmi Bey about the situation. She asked him if there was a problem with the building’s walls. Everything was normal. In a final effort she asked her son, who was studying at a technical high school, to find her a secret camera she could use to watch the house at night. She would have gone ahead with the plan if her husband hadn’t stepped in, saying, “that’s a crime, you’ll get in real trouble.” Admitting all her realistic assumptions offered no answers, she concluded as a person of faith that higher powers were trying to tell her something. She came to believe that the spirit of the late Neriman Hanım was watching her from somewhere above, sending her all the dust to say that she wasn’t happy with the order at home. Then for some reason she began to believe that Neriman Hanım had overheard her whispering to Hasan of their dreams as they lay in bed (if their son won a place at the university in their hometown they were going to transfer Kemal’s care to her husband’s sister and move back there) and so now the deceased was sending a daily shower of dust to remind Ikbal of her promise. So she forbade herself to talk with Hasan about going back to their hometown, even thinking about it (as spirits can read minds). And one day when Kemal went to the hospital to get a prescription for his rheumatism with the son of a downstairs neighbor, she snuck the neighborhood psychic Aysel into the house and had her search every corner of the place for any signs of ghosts. (For a small fee Aysel found solutions to just these kinds of problems.) But her efforts were in vain: Ikbal found neither the origin of the dust nor an explanation.

After Neriman Hanım died Kemal hardly ever left home. He had lost both the woman he loved and his last relative and friend. Now Kemal Bey was never one for discussing daily affairs. He was the kind of man whose sayings and jokes took a little time to sink in before you could fully crack them. The years he shared with Neriman Hanım weren’t spent talking about each other but laboring to see the world through each other’s eyes. Before meeting his wife his sole passion was the theater. And over the years Neriman Hanım learned more about his love for the art as she met his friends from the drama club. Once at a reunion party these same friends insisted he recite that famous speech by Marc Anthony, which he had learned by heart and performed when he was young. Two lines from the speech were written on a tattered piece of paper on the top of a corkboard they had mounted near the bookcase: “The evil that men do lives after them/the good is oft interred with their bones.” In the wake of Aysel’s unsuccessful search Ikbal shivered every time she read those lines before scrambling to a far corner of the house.

Dust and Ikbal’s grumbling then became a part of Kemal Bey’s daily routine, as regular as his boiled egg for breakfast. That day Ikbal had expertly cleaned every corner of the house again with her dust cloth. She had cooked Kemal Bey leeks in olive oil. The old man was reading in the living room while she was getting ready to leave.

“Don’t sit there like that in silence, Kemal Bey. Let’s get you a TV already.”

“May God grant you a long life! You’re in fine fettle, God praise. But I heard in the news this morning that another cold snap is on the way. You should be careful not to catch a chill. When I come tomorrow I’ll bring bones from the butcher and whip you up a tasty bone broth, wouldn’t you like that?”

“If you’re going to put in as much hot pepper as you did last time, don’t bother,” said Kemal laughing.

“Shame on you, Kemal Bey, I always use Neriman Abla’s recipe and you gobble it up. There was just that one time I mixed it up and you never stopped telling me about it,” said Ikbal with reproach. “Enough already, I’m leaving. You can lock the door behind me.”

Kemal sat in the living room and read by the light of the desk lamp until it was dark outside. He ate two slices of bread and a plate of leeks. He put on his pajamas which Ikbal ironed every day before setting them his bed (following the final orders Neriman posted on the fridge). Then turning off the light he climbed into bed. He was fast asleep the moment he shut his eyes. While his aged body labored like an old, rusty machine, his memories, thoughts, fears, damnations and the plays he knew by heart all stored up in his joints began to slowly grind his bones. Over the years all the ideas that passed through the filter of his mind and into his bones became fine flour in the weary mill of his body. And with every breath came a puff of dust; it was now all he gave to the world. In this house where he spent his remaining days without Neriman the dust rose to the ceiling before settling evenly over every piece of furniture that Neriman carefully placed around the house. His heart continued beating and his body continued to grind. Layers of dust covered everything around him. Ikbal came at eight in the morning, put four big bones she’d bought from the butcher in a pot to boil, prepared his toast and boiled his egg, and, picking up her dust cloth, she started complaining.

Translated from Turkish by Alexander Dawe.

Pelin Kivrak entered the PhD program in Comparative Literature at Yale University in 2012 after spending a year in Istanbul as part of the creative team at Orhan Pamuk's Museum of Innocence. Her dissertation, tentatively entitled Imperfect Cosmopolitanisms, examines the relations that several late twentieth-century novelists and filmmakers from the Near East bear to the concepts of cosmopolitanism and hospitality. Her broader research and teaching interests include realism and visual culture, modern and contemporary fiction, intellectual history of the 20th century, history of feminism and the study of the novel. She was the recipient of the MacMillan International Dissertation Fellowship and spent an academic year (2016-2017) conducting research in Istanbul, Tehran and Paris. Kivrak is a fellow at the MLA Connected Academics Program in New York this year. She holds a BA degree in Literature from Harvard University. In 2017 she was the winner of the Yaşar Nabi Nayır Short Story Award.