Seeing from Scratch: A Paleo Diet

“Learn to see before learning to read.” 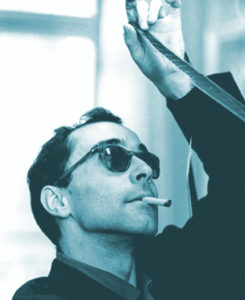 Do we really need to learn how to see? We usually assume that seeing comes naturally, while reading comes by good fortune (and hard work). Even when we know how to do both, seeing still comes first, like hearing before listening, or breathing before whistling. Being able to see seems to be a matter of basic physical capacity, however complex and variable, while being able to read depends on a specialized skill acquired later in life, including the mastery of vocabulary and grammar. Seeing, along with the other bodily senses, orients us in our immediate surroundings, but reading orients us in language, which offers access to worlds beyond our own perceptions and experiences.

So it seems pointless for anyone to suggest that we should learn to see: if you can read this sentence, you must already know how to see it. Seeing is what we take for granted when we read. Of course, we can always learn to see more carefully—we like to think that reading can train the eye to look in ever more “perceptive” ways. After all, if words could not instruct our “ways of seeing,” there would be no point in reading this sentence in the first place.

In fact, John Berger begins his book Ways of Seeing with this statement: “Seeing comes before words.” It might sound obvious, but it is not quite right. Even if seeing comes first when we read words, it does not when we listen to them. A child may see words as squiggles before she can read them as words, but that does not mean that language simply waits for us to grow up: it is already there from the moment we are born.

Reading comes “after” seeing because it is supposed to be better, higher, smarter. It promises access to all kinds of knowledge about the world and the cosmos, from brute facts to subtle mysteries. Certain specialists in reading—judges and critics, for example—exercise decisive social power, adjudicating and appraising the significance of everything they survey. Whatever concessions may be made to the power of images, the power of words (and numbers) still triumphs, as it has for thousands of years.

That’s the usual story, anyway. But by now you might have begun to suspect that things are not so simple. Perhaps seeing and reading are not merely sequential or complementary, but actually antagonistic. Surely we can wonder—without becoming mystical about it—whether reading actually impairs or obstructs our ability to see.

“Learn to
see
not to read.”

This refusal of reading is hard to grasp unless we admit the possibility that we have forgotten how to see, or that we never knew in the first place. Moreover, we would have to suppose that this blindness is cultural and historical rather than physiological. “Learning to see” would thus demand a constant vigilance, if not an outright hostility, toward all of the privileges invested in the act of reading—all those individual acts of discrimination and judgment that add up to the whole edifice of scriptural authority. The accusation is not just that reading directs all questions of knowledge to some higher power or some deeper meaning; it is that people who embrace the higher value of reading thereby lose the ability to see, think, and act on their own terms. So the “enemy” is not reading as such, let alone language as such, but the whole system of procedures and apparatuses that wield a monopoly power over whatever counts as reality. Godard is very clear about that authority: in one place he calls it “the state,” and in another he calls it “capital.”

Godard is also clear about the alternative: he calls it “socialism,” and it is immediately connected to seeing. As he says in 1978: “The new-born child is, I think, a socialist; it needs to see first and to touch what it sees and to see what it touches.” But the child doesn’t stay like that: she learns to read and henceforth knows the world only through what can be said about it. There would be socialism, then, when people can “get along on the basis of what they see,” when a child’s way of seeing and touching here can be productively connected with the seeing and touching of others elsewhere. “There must be moments of socialism in love, the moment when the labors of one body or between two bodies no longer needs words. Or they need words for sometimes dreadful things.”* In this sense, all of Godard’s films since the late 1960s could have been called Film Socialisme (and not just the one he released in 2011) because all of them propose seeing and touching as fundamental social relationships, for better and for worse, as cinema alone can teach us.

What had first seemed like a gentle proposal about our sensory education has turned out to be a declaration of hostilities. Perhaps this approach will seem too contentious or speculative, but there is no going back: we can never again view the relationship between seeing and reading as a natural division of labor or a peaceful compromise. Here, then, is a new starting place: we do not yet know how to see.

“Learn to see here, in order to hear elsewhere.
Learn to hear oneself speaking, in order to see what others are doing.
The others, the elsewhere of our here.”

We are trying to learn to see, but now the task has become rather more complicated. It is not simply a matter of training our sense of sight, or of exercising care when criss-crossing between words and images. Learning to see involves a more general kind of attentiveness: not only in the self-centered sense of paying attention to what is immediately around us, but also in the more transindividual, decentered sense of finding ourselves in tension with what is not immediately there. Learning to see opens us to our other senses, yes, but it also dislodges us from the present-tense feeling of self-sufficiency and certainty.

This statement from Ici et ailleurs—these are the final lines of the film, spoken by Anne-Marie Miéville—is both categorical and circuitous. Unless we learn to see here, we will be unable to hear what is going on elsewhere. The switch of senses is significant: she does not say that we should learn to hear here in order to hear elsewhere, because what we can hear here is, first of all, simply ourselves. So unless we learn to hear ourselves—to learn to see the distance between ourselves and our words—we will be unable to displace our own “here” and learn what others are doing. Finally, unless we learn to encounter that elsewhere and those others, our sense of our shared situation will be faulty. When we ask what it means to understand a “world,” the twists and turns of this statement should come to mind.

For example: In the context of this film—which may become, for a time, part of our context as well—the final injunction raises some questions.

Does it matter that the elsewhere addressed in the film is called Palestine?
Is Palestine one of our elsewheres, or one of our heres?
What have you heard, what have you seen, what do you know,
of the people who live there?

“In order to learn how to see, one must know how to show what one has seen.”

When I asked the philosopher Bernard Stiegler about Godard’s remarks, he offered this splendid aphorism. I think it is best approached as a very special demand: out of the countless ways of seeing, only a few require us to learn how to see again—to learn how to see from scratch—which requires that we know how to show what we have seen. “Knowing how to show” is the minimal condition, but also the radical point of departure, for the work we have to do.

Over the course of many years Stiegler has developed a far-reaching philosophical account of the industrialization of consciousness through contemporary media technologies. We do not need to retrace the full outline of his arguments here; it is enough to ask whether his insistence that we “know how to show” might provide a useful pedagogical response to the “massive destruction of attention” and “symbolic misery“ that characterize contemporary societies.**

So the imperatives of showing provide a set of criteria to guide our decisions about how we spend our time seeing. Whatever blocks our ability to gather, shape, and share will be destructive; by contrast, whatever helps us to learn, know, think, and act, using all of our senses and abilities, will be creative. All of which is to say: we somehow know that some media objects are not only a waste of time, but actually harmful to our capacity to live a good life. And we also know that a good life can involve all kinds of media objects. But it’s not clear how to tell which are which.

Someone might say that seeing and showing are not so hard. Maybe the digital media have erased the distinction between passive and active seeing, and the smart phone offers the most perfect tool for showing-what-we-see (all gathered, shaped, and shared in an instant) ever known to homo sapiens sapiens.

Instead of rehearsing such claims and counter-claims, let me make a proposal. We should adopt a paleo diet for the new media. There is only one rule to follow: you should use only those media technologies (and use them only in whatever ways) that allow you to be as intelligent, as dexterous, as attentive, and as open to your environment as the technologies used by paleolithic people. Try it. You will soon see how many of our capabilities we can relearn and reclaim from our apparatuses.

Richard Dienst teaches at Rutgers University. His last book is The Bonds of Debt: Borrowing Against the Common Good (Verso, 2011).

**See, among many others, Bernard Stiegler, Technics and Time 3: Cinematic Time and the Question of Malaise (Palo Alto: Stanford University Press, 2010) and What Makes Life Worth Living: On Pharmacology (Cambridge, UK: Polity, 2013).