“playing the devil’s advocate, the paradox of all of this
is that it seems that we are called to save capitalism ourseleves
because, finally, all the economic programs of the left are neo-Keynesian”

The Elections of May 24: Spain held its regional and municipal elections on May 24th, but because no party came close to an absolute majority , all sorts of negotiations have been underway ever since (“la politica de los pactos”) and the final results are only now becoming clear.  At the regional level, where parties vie for control of Spain’s seventeen state-like entities, the two new parties (leftist Podemos and centrist Ciudadanos) did less well than expected: Podemos has a chance to govern in only one of the autonomous regions. But PSOE, the traditional party of the mainstream left, did well enough that,  with the help of Podemos or other local parties, it will turn the conservatives out in several regions. This represents a dramatic shift to the left, but not the wholesale repudiation of the two party system and corrupt political “caste” devoutly desired by Podemos and many within the popular movements.

At the municipal level, however, the changes were more dramatic. The conservative Partido Popular (PP) lost its grip on more than 20 of Spain’s most important cities. And while the PSOE took Seville and several other municipalities from the conservatives, the big winners were alternative platforms of the left, cobbled together to challenge both PSOE and PP. These coalitions brought together militants from Podemos, which chose not to run its own candidates in the local elections, and representatives of a whole range of local and national social movements spawned by the Crisis and the indignados mobilizations of May, 2011.

When the first results came in the question was whether these groups, with the support of PSOE and various local parties of the left, could actually take power in the cities. The headlines answer this question. In El Pais, “Grupos alternativos de izquierda gobernarán las mayores ciudades”; in Publico, “El PP pierde 15 capitales de provincia debido a los pactos.” Amazingly, four of the five largest cities in the country will be run by “plataformas municipalistas de la izquierda alternativa” (municipal platforms of the alternative left), ad hoc groups made up of popular movements and supported by Podemos. So, for instance, Madrid, long a stronghold of the PP, will be governed by a coalition, “Ahora Madrid,” led by a seventy plus year old labor lawyer and communist named Manuela Carmena.  And Barcelona, Spain’s second city, will be governed by Barcelona en Comú, the alliance headed by Ada Colau, a leader in Spain’s anti-eviction movement. Valencia and Zaragoza will also be governed by ad hoc “partidos-movimientos” of the alternative left, as will a number of smaller but still important cities  such as Cadiz  and Santiago de Compostela. If it is the case that transformative political movements often begin in great cities, this is heartening news indeed for the proponents of fundamental change.

But what do these movements want, and how do they propose achieving their ambitious ends. Here we find some familiar disagreements and confusions arising. For all, the chief goals are a Spain with much less economic desigualdad (inequality) and a much more open and accountable political order. (Right now, for instance, the “closed list” parliamentary system of elections in Spain gives extraordinary power to the major parties’ insiders and funders and radically weakens citizens’ control over those who ostensibly represent them. It is a major factor in the production of a “political caste” unresponsive to popular needs and demands.)  But while some dream of transforming the economy in ways that would dismantle capitalism itself, others profess to be interested solely in re-establishing the Keynesian order dismantled by neoliberalism’s agents in the Spanish government and the Eurozone. And while some dream of a radically more “horizontalist” distribution of power in the parties, the cities, and the nation, others  would stop with political reforms like the introduction of open lists. 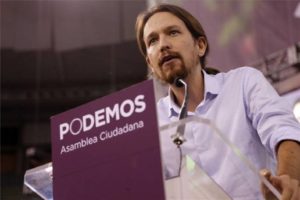 Podemos: Podemos, still the single most powerful expression of the alternative left, has itself embraced all of these goals at one time or another. Its founders went to school in left groups hostile to capitalism itself, and/or worked for Latin American populists determined to radically redistribute power and wealth. But after a rash of critical scrutiny  in the fall of 2014 and a November television interview by Ana Pastor that badly damaged the party leader’s image as a brilliant political thinker and invincible debater, Podemos began backing away from its most radical positions and honing a social democratic image. Pablo Iglesias, the aforementioned leader, justifies this shift in terms of the politics of the possible. Given the current situation in Spain, he writes in a just published New Left Review article, what Podemos can accomplish “has nothing to do with revolution, or a transition to socialism, in the historic sense of those terms. But it does become feasible to aim at sovereign processes that would limit the power of finance, spur the transformation of production, ensure a wider redistribution of wealth and push for a more democratic configuration of European institutions.”  “We are not opposing a strategy for a transition to socialism,” he declares in the interview that accompanies the NLR article, “but we are being more modest and adopting a neo-Keynesian approach, like the European left, calling for higher investment, securing social rights and redistribution.”

This “modest” shift entails some striking substitutions. Keynes replaces Marx as the economic guru of the movement, and Laclau and Mouffe, the philosophers of the Latin American populist movements, replace Marx, Lenin, and others as the theorists of political practice.  Following their lead, Podemos has fought to construct a new discourse of opposition in which the “us and them” of struggle are no longer the traditional class subjects of Marxism but something like the ninety-nine percent and the one percent. And it has also committed itself to the construction of a tightly organized (verticalist) national party with a canny publicity machine, a charismatic leader (Iglesias himself) and a commitment  to taking national power as soon as possible. This puts the party at odds with the emphatically horizontalist ideology of many of the popular movements which fed it and which continue, as the municipal elections show, to have both power and appeal. Yet many within Podemos continue to embrace the dreams of these movements. Only a couple of weeks ago, for instance, a group of Podemos activists published a manifesto called “Abriendo Podemos” (“Opening Podemos”). The manifesto’s title alone constitutes an indictment of the party’s ostensibly undemocratic structure, and the text calls for a reaffirmation of the deliberative practices of the grassroots asambleas and circulos and an opening to popular front alliances outside the party. Party leaders have so far rejected both calls.

Arguably, the party’s new direction introduces a certain duplicity in its relation both to itself and to potential voters. That is to say, it introduces a tension between the party’s actual beliefs and goals, which go well beyond neo-Keynesian reformism, and its publically stated beliefs and goals. And this discursive duplicity in turn produces a new and frankly duplicitous theory of coming to power, one that is starkly at odds with the party’s posture of  plain-speaking and with the ethics of the democratic popular movements. “It’s true,” Iglesias concedes,  “that this choice of the [social democratic] middle ground generates ambiguities, at least, till we reach control of the state and the institutions—because there are two moments: this moment, the strategic moment, so to speak, and then the moment of the state.” In other words, and Iglesias makes this clear elsewhere as well, the party will win on the basis of one program and rule on the basis of another, more radical, set of objectives.

The Coming Elections: So what is likely to happen in November and beyond? In the NLR interview, the interviewers suggest that Laclau and Moufee may not prove very good guides for the long trek to national transformation. Their theories, for instance, don’t have enough to say about the capacity of the powerful to resist change or about the economic dimensions of struggle. Iglesias concedes as much, and acknowledges that both the Spanish right and the neoliberal forces of the Eurozone have moved effectively to check Podemos’ initial appeal. “Our task has become much more difficult,” he concedes.

Antonio Negri, in a series of trenchant reflections on the party’s new directions (see  transversal.at.), points to other problems. He worries about the consequences of Podemos’ unreadiness to speak the truth about its  radical project, “llamando a las cosas por su nombre,” (Iglesias) and about its commitment to “storming heaven” (Iglesias quoting Marx)–seeking national power in the immediate future. He sees both decisions as weakening the party’s long-term appeal to its base and mass supporters. Even if the party wins this fall, he warns, it can only make and preserve actual transformative changes if it works with, within, and for the popular movements and voting public which brought it to power. Otherwise, it will quickly succumb to the counter attacks of its powerful adversaries. Sebastiaan Faber and  Bécquer Seguín, writing in The Nation, echo Negri’s concerns, albeit somewhat obliquely: “Even if a major victory remains out of reach this fall,” they write,  “Podemos will have gained a strong foothold from which to push for change. The fact that the party proved strongest where it joined forces with others and stuck to its activist origins should help define the road ahead.” This road, they conclude, must be one of “patience.”

Today’s Podemos, still less than two years old, is already a haunted house. It is haunted by its strategic rejection of its ancestors (Marx, Lenin, the radical democrats of the Indignados movement and the asambleas) and by the continued appeal of their radical prescriptions for change. These ancestors speak out in the ongoing episodes of internal dissent and the franker proclamations of its leaders.  It is haunted as well by its deliberate decision to employ a political language that is, finally, not its own. (Iglesias remarks on  the pleasure of being able to speak, in the NLR pieces, “in my own voice.”) And it is haunted by a terrible sense of urgency provoked by its oft-repeated assertion that the  moment of opportunity  prompted by the Spanish crisis will not last; that capitalism can and may well regroup and rebuild its hegemony. These are by no means unbearable burdens, and the difficult choices that gave rise to them are plausible ones. But recognizing them can help us understand why the most recent polls suggest that  Podemos’s growth has stalled, with only some 21 % of Spaniards presently identifying themselves as supporters, about as many as those who continue to support the old parties of the left and right.

If I were to bet today, I’d say that November’s elections are likely to produce results not unlike May’s. Broadly speaking, Spain will vote against corruption and neoliberal austerity. But there will be no clear winners. The parties, Podemos included, will have no choice but to step out of their fortresses and seek common ground with their ideological  neighbors. And most Spaniards will be quietly satisfied with these results, which will turn Spain to the left without enthroning any single party of the left as the dominant force in Spanish politics. If this occurs, Podemos will have won a great victory, if not entirely the victory they imagined.

John McClure is Professor Emeritus of English at Rutgers University-New Brunswick. His most recent book is Partial Faiths: Post-Secular Fiction in the Age of Pynchon and Morrison (2007).