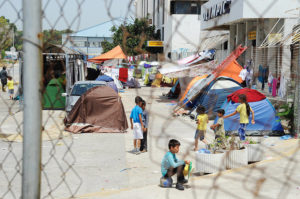 These days I take the long way to work, past the old international airport of Athens, the “Hellinikon”, located on Poseidonos Avenue washed by the “wine-dark” Aegean sea. “Ellinikon” is now the home of hundreds of refugees who have managed to arrive with the hope that they would eventually cross the Greek borders in the north to settle in Europe. Not the kind of Europe Greece is, economically destitute, socially and politically bound by the Troika, a postcolony of the European South, but real Europe, where paradise awaits: jobs, education, and social welfare. Nice parks, an organized public sphere, a future. In Kiel, where I spend my summers visiting my husband who has been working there ever since he lost his job in Athens, I see a version of this North European paradise. The old Helicopter Base near our apartment houses hundreds of refugees in nicely restored accommodations where they prepare for a life in Germany. They and their children ride the bikes the locals have offered them around the little community of Holtenau past the graffiti that reads “Fluchtlinge willkommen” [Refugees welcome].

It is the end of the summer and my daughters and I are back home. These days in Athens, my days last long. I think about my courses at the university, my students’ inquisitive eyes when, while contemplating the meaning of democracy in the present, we try to respond to a photograph of immigrants washed up on the Mediterranean shores; wrapped in thermal blankets, stooped to the ground seeking the warmth of the land, their bodies look like human flesh turned into stone. Saved but unreal, present but hidden from the lens, these human bundles shimmering in the metallic color of their wraps look like extra-terrestrial waste washed ashore. My mind takes flight to my father’s deathbed in the public hospital, how he is too sick to await any other redemption but death, how this is probably a better end than what my family and I fear, seeing my father wither away to a life in dementia in some kind of cheap clinic we would barely afford (his pension has been downsized by 40 percent), when we could no longer provide for him at home. The heat is strong, the sea breeze is inviting and like another Ishmael I “get to sea as soon as I can.” I need some fresh air before my nostrils fill up with the hospital’s odors, dirty sweat, urine, decaying flesh, before I face my father’s lionesque figure lying still in bed. My sea route and the comfort it has offered me over the years, and especially during the period we call the “years of the crisis,” have changed; the old airport now stands as the milestone of the European policy of closed borders and the permanent place of residence for all the refugees who since then have been stranded in Greece. Paradise can wait, or better, there are no vacancies in Paradise. I often make a point of swerving to the right lane, and slowing down before the traffic light at the exit to the airport until it turns red and I have to stop. There is nowhere to park outside its premises and I want to avoid driving through like a tourist visiting the ruins of human pain; I still remember my Grenadian friend’s scoff at the tourists’ tours of estates advertised as slave plantations in the Caribbean, most of them set up as theme parks that obscure the fact that everything, including the luxurious hotels where tourists stay, is built on the ruins of slavery. What is there to see at the airport that I cannot bear witness to every time I stop at any traffic light, or at the public beaches in Glyfada, or downtown in the center where a lot of poor and homeless people, together with the refugees and the immigrants, roam the streets, at times scavenging for food and clothes? Still this is a good traffic light, the last one before hitting the other highway to the hospital and then the university, where the sea breeze overpowers the heat. I hold on to its freshness for hours, thinking about it, dreaming of it, so I stop. At the traffic lights, the refugee children chase, push and shove each other, bursting into laughter, mindless of the heat, the traffic and the noise. The sheets of their makeshift tents slightly flutter in the soft breeze and the airport looks like a wasteland suddenly blooming into huge water lilies with their petals breaking into the colorful rugs that barely hold the night shelters together. I gasp for air but I can smell human odours mixed with the familiar scents of the sea; the pungency of sulfur is overcome by sweat, urine and musty clothes. I turn to the sea to make sure I am not dreaming, I am there, I am not in the hospital, and I see their blankets and sheets laid out to dry in the sun. The barbed wire that fences the coast to protect it from the busy highway looks like a long clothes line stretching from one side of the coast to the other covered with blankets, sheets, scarves, clothes, and all kinds of rugs. Early in the morning, the pensioners who live nearby and cannot afford the longer ride to quieter beaches down the coastline, take their swim next to men, women and children who wash their clothes and take their morning baths. The old airport, too small for the European country Greece became after the Schengen agreement and the Olympic games, was built to cater to the needs of three to four thousand passengers per day, as an architect and friend of mine reminded me when I told him about it. Can you imagine, he said, living on the premises and using the toilets of the old airport? I nod. I remember the old airport too well; my father used to wait for me every time I returned from my trips abroad to give me a ride home. It was too small when compared to the airports of other big cities in Europe and the US, but I always thought it was the best located airport, right between the Acropolis on the one side and the temple of Poseidon on the other.

The heat and the uninviting scents make me dizzy and I hit the gas feeling upset. The day is long, all days are long these days, and I need to think and breathe. Somehow it is impossible to do both; thinking about the photograph and smelling the human life it evokes take my breath away. My body is restless; my nostrils are filled with the disturbing smells of human flesh that I carry all the way to the hospital. My father is still alive, breathing towards his death. There is no breeze in the hospital; the hospital staff are doing their best to care for the living and soothe the dying. My father’s shirt is stained with blood and iodine but I cannot complain; I know that all public hospitals are understaffed these days. I cannot change him alone and stand disoriented straddling the spaces in between the scents of the sea, the aromas of the gardens in the neighborhood where I live, the musty clothes of the refugees and the corridors of the public hospitals that are crammed with patients. I see my father’s body sweating, giving off his usual smell, a mix of Old Spice and salty sweat. He gasps for air: is this what my beloved philosopher means when he says, “I posthume as I breathe”? I make friends with the odour; he is alive, this is what it means. His sweat is the bitter fruit of his struggle for life. You cannot eat bread if you do not sweat, my grandmother used to tell me. I think about the labor of life, the colors of the sheets, the sweaty children’s roaring laughter under the hard sun; the everyday practice of living that points to its interiority: behind the sheets of the tents, they tell stories, they envision the future, they make plans.

These days, the newspapers report the reaction of certain communities and parent councils to the admission of refugee children to the public schools in their areas on account of the possible diseases they might carry. The argument is almost always the same: “We are not racists, but we do not trust the state to have taken the right hygiene precautions.” “But they are scheduled to take afternoon classes, there will be no physical contact with them,” goes the counterargument. No physical contact. Daphne Matziaraki’s documentary “4.1 miles” reports the agonizing efforts of a crew and the captain of the Hellenic Coast guard in Mytilini to save hundreds of refugees who survive the crossing of the Aegean Sea; the naked body of a three-year old held by the ankles is shaken back to life. The crew and the locals run to offer the survivors assistance, touching them, holding them, bringing them back to life. Flesh matters; it is “the text of living and dying,” in Hortense Spillers’ powerful words. After the scene of human disaster, the matter of flesh lays claim to living well. We are good, at least better than Europe proper, at saving them, but are we–here in Greece, in Europe, in the civilized West–good at acknowledging the responsibility to properly respond to the right of their lives to live well, to a bios politikos? There can be no real affirmation, “yes, they are welcome,” without the infrastructure that enables this right. In the past weeks, I wonder how disturbed we get by the recognition that saving lives also means bearing the responsibility to acknowledge the right of these human beings to live well as a sine qua non of human flesh. The text that connects us. The text we cannot avoid.

On my way back home, I find a place to park across from the old airport. I get out and hold on to the barbed wire. Their bodies are not statues, they do not lie still to be saved. They are alive. My nostrils fill up with the odours of human flesh, and the scents of the sea, the sweet aroma of life. Human life that perseveres.

Mina Karavanta is Associate Professor of Literary Theory, Cultural Studies and Anglophone Literature at the University of Athens. She has published numerous articles in journals such as boundary 2, Feminist Review, Modern Fiction Studies, Mosaic, Symplokē, and the Journal of Contemporary Theory. In addition to translations into Greek, she has co-edited Interculturality and Gender, with Joan Anim-Addo and Giovanna Covi (2009) and Edward Said and Jacques Derrida: Reconstellating Humanism and the Global Hybrid, with Nina Morgan (2008). She is a founding member and co-editor of the electronic journal Synthesis.