Ending of the American Century 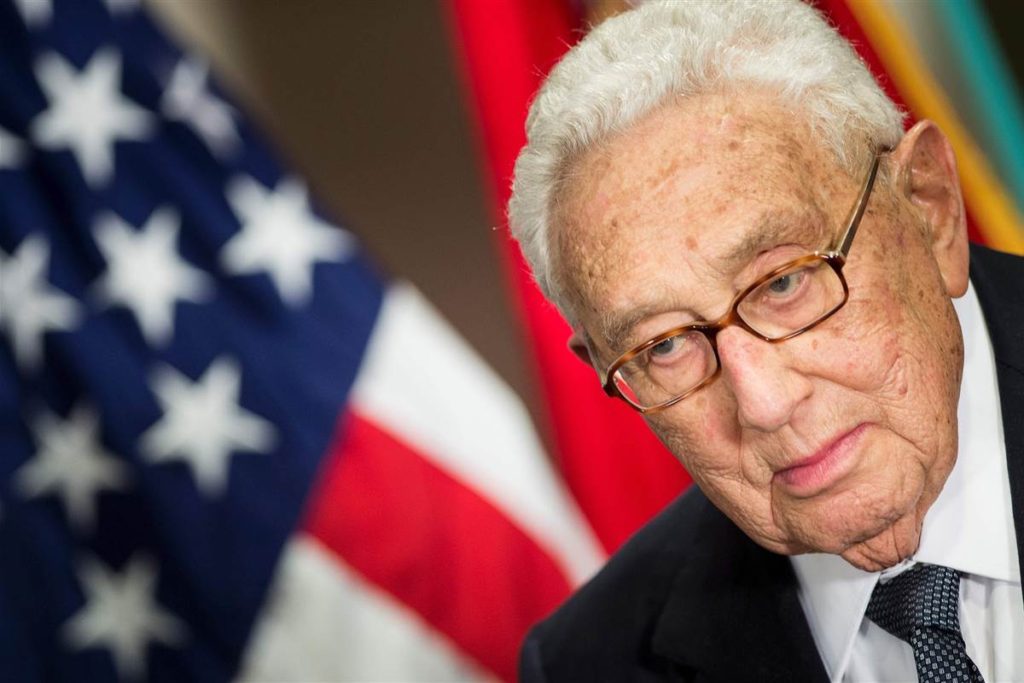 So much for the horror of that neoliberal bond between Henry Kissinger and Hillary Clinton.  I hope your vote wasn’t cast as a result of such horror, because your favorite war criminal Harry the K is now praising as well as advising Donnie the T. (a.k.a. President Donald J. Trump).  From a CBS News interview as reported by Politico:

“Trump, Kissinger said, ‘has the possibility of going down in history as a very considerable president.’  Because of perceptions that Obama weakened American influence abroad, ‘one could imagine that something remarkable and new emerges out of a Trump administration,’ he said.”

Yeah, like an arms race or a trade war with China.  Or, you know, like some more war in the Middle East, like maybe another Israeli invasion of Lebanon to teach Hezbollah not to pester those new settlements.  Russia gets a pass, of course, because Trump and Kissinger agree that Vladimir Putin is a statesman.

Which raises serious questions.  Like, why would Kissinger, the consummate “realist” among foreign policy-makers, embrace the gold-plated charlatan who will soon “occupy” the presidency, a man who obviously knows nothing about the world outside his own (literal) grasp?

Greg Grandin has the answer in his brilliant bio of the K, where Henry is properly portrayed as a Nietzschean who abuses history by taking the dare of making it.  Kissinger isn’t Metternich—he has always been totally uninterested in conserving what is left of the ancient regime, or even in restoring order.  Like his new client, he wants power, and the ends of its deployment are secondary to the existentialist possession of it.  Diplomats have only interpreted the world differently.  The point is to change it.

I have other questions, the kind Kissinger wouldn’t ask because he’s too excited, at the age of 93, to be center stage again.  Why would Trump reassert the significance of military power in foreign policy after the debacles in Afghanistan and Iraq (not to mention Gaza, Yemen, and Syria)?  Why would he threaten trade war with China? In short, why would Trump repudiate the principles that have regulated American foreign policy for a hundred years?

You got me, except to say that the world has in fact come undone, and nobody seems to know how to stitch it back together.

I have long argued that US foreign policy in the 20th century—the Open Door world—was a vast improvement on all its predecessors in the history of imperialism because it wouldn’t settle for the conquest of territory, the subjugation of indigenous peoples, and the appropriation of the products of their labor.  Michael Hardt and Antonio Negri make a similar argument in Empire (1999); like me, they obviously learned something from William A. Williams, Bill Warren, Martin J. Sklar, Carl Parrini, and Richard Sklar.

Here’s the key.  The foreign policies that accorded with an Open Door world insisted on development rather than exploitation, in keeping with the liberal notion that imperialism was not, by definition, a zero-sum game, but a reciprocal relation that could benefit all parties to the bargain.  I’m not saying these policies accomplished this, only that their makers hoped they would.

According to the architects of the new imperialism at the State Department, ca. 1899-1919, European colonialism was inducing rebellion everywhere instead of development or progress anywhere.  Revolution would surely follow, as in Russia (1905), Mexico (1910), China (1911), and elsewhere—and these events would soon seal off the entire Eurasian landmass from western influence (or investment).  Then we would face world war, as the advanced capitalist nations scrambled to reassert their claims on global resources by military means.  What was to be done?

Invent an anti-colonial imperialism, they answered—an Open Door world, where exclusive European spheres of influence in Asia and Africa, or anywhere else, would no longer limit either the flow of finished goods (trade) or the transfer of technology (direct investment).  By this means, a post-colonial world would emerge, and hitherto subjugated peoples could then choose the path of modernity blazed by the US.  Or not.

I know, it sounds idealistic, almost altruistic.  But it was neither, and, in any case, they meant it.  I used to think that the American Century, so conceived, ended with the militarization of US foreign policy in the 1990s and after, culminating in the insane war on Iraq.  I said as much in a book of 2009.  But now I think Donald Trump is a more likely candidate than George W. Bush for the title of the delusional twit who destroyed what remained of American credibility in a post-colonial world.

To see why I might be changing my mind, consider the assumptions that informed the original Open Door policies, again ca. 1899-1919.

(1) World peace depended on global economic growth in two senses: (a) the benefits of such growth had now to be redistributed to formerly colonized or less developed countries, because otherwise they would keep rising in rebellion against the imperial powers; (b) the volume of world income had to grow continuously so that no nation would decide that its share of world income was inadequate, and, accordingly, be forced to increase its share at the expense of other nations, by means of tariffs and other barriers to trade and investment, or by military means.  (cf. Japan, Germany, ca. 1894-1945)

(2) Trade wars by means of tariffs, spheres of influence, etc., were the origins of war as such, even world war, as witness the carnage of the Sino-Japanese and Russo-Japanese wars ca. 1894-1904, and the skirmishes under way in Western Europe as early as 1906, at the Algeceiras Conference that validated German concerns about its access to African markets.  The choice was simple: either exclusive spheres of influence or a new imperialism aimed at dismantling European colonialism.

(3) Colonialism and its cultural attendants, such as racism (“the white man’s burden”), were impediments to world peace—so conceived—because they were merely exploitative, aimed at extracting wealth from host countries instead of developing their resources.  Again, the choice was simple: either share the wealth, redistribute global income, or face rebellion, revolution, trade war, and world war.

(4) Transfers of technology (direct investment) were much more important than trade in effecting this developmental sequence.  In other words, the advanced nations had to provide the less-developed countries of the world with the capital they needed to manufacture goods for themselves and other nations.  Of course the investors would profit from such transactions, but eventually the former colonies would compete with the advanced nations for opportunities in local and global markets.  (cf. China, India, et al., since the 1970s)

(5) The seat of empire would keep moving East to West, but a de-centered multi-lateral world, with many such seats, was inevitable once development had become the goal of imperialism.  Any attempt to arrest this movement—to reassert the standing of the status quo ante—would be a disaster, because it would necessarily involve tariffs, trade war, and war itself (although armed struggle would probably take the form of civil and/or regional wars).

In these terms, Trump, like his pal Putin, is a throwback to the intellectual hemisphere of the 19th century, when measuring the balance of military power was the only way of thinking about world power as such.  He is no less an atavism when he claims that new trade agreements will change the balance of economic power.  They won’t, and they can’t.  Those manufacturing jobs aren’t coming back, regardless of what the twit-in-chief does about NAFTA.  The US has been running trade deficits for 50 years because that’s what the seat of empire must do to maintain its leading role in the world economy (cf. the UK in the 19th century).

So the ending of the American Century does reside in the militarization of US foreign policy under Clinton and Bush, but also in the Trumpian notion that the Open Door must be closed.  Or should I be citing Kissinger at this point, as the intellectual godfather of the thuggery required of these new men of power?  After all, he’s the man who praised his old friend Putin in that same CBS interview, as follows:

“[He] is a ‘character out of Dostoyevsky,’ Kissinger said, a reference to the 19th-century author who chronicled the often bleak lives of Russians in novels such as ‘Crime and Punishment’ and ‘The Idiot.’ ‘He is a man with a great sense of connection, an inward connection, to Russian history as he sees it,’ Kissinger said of Putin.

“The Kremlin took it as a compliment. ‘Kissinger knows our country really well, he knows our writers and our philosophers so such comparisons from him are quite positive,’ a spokesman for the Russian government said, adding that Kissinger ‘has deep knowledge, not superficial.’”

These remarkable statements strike me as prompts for the casting director of the surreal scenes now unfolding.

Let’s say Putin is an imposing character out of Dostoyevsky—Rodion Raskolnikov, who murdered an old woman, or the Underground Man, who gambled on everything except the future, or the Grand Inquisitor, who demanded confessions from everyone without the sanction of God, an intelligence officer avant la lettre. Does it follow that Trump is the feckless lead from “Fifty Shades of Grey,” but now stripped of the quasi-military, sado-masochistic equipment that befits the role?  Or is the president-to-be now the stooge in a new reality TV show called “The Applicant,” co-hosted by Kissinger and Putin?

But Henry, oh Henry, what does your literary citation tell us about you?  Have you finally become Dr. Strangelove, heiling whatever Hitler wanders into view?   Or, have you just decided that being in power is better than being dead, no matter what the purposes of the powerful might be?

All right, I admit these are rhetorical questions.  The reality is that these people are so ruthless, and clueless, that they would raze the planet if that would keep them in power.  They would gladly eat their own grandchildren, and, having deftly described the meal as if reviewing a restaurant, dutifully explain why they had to.

James Livingston is Professor of History at Rutgers-New Brunswick and the editor of P/L.  He is the author of Against Thrift (2011) and No More Work, (2016).